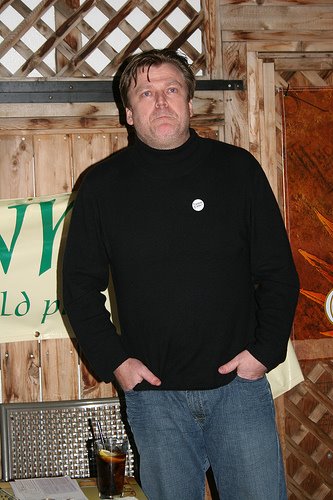 The great thing about this issue is that Sam posted this information on Thursday. He asked Patrick Byrne to respond. And Byrne has nothing to say. Investigative journalist Gary Weiss notes:

Overstock.com CEO Patrick Byrne has arguably the biggest mouth in Corporate America. His online rantings are the stuff of legend, and he is only to happy to appear on stock-promotion websites to divert attention from his company’s abysmal performance.

So that’s why it’s very significant to observe Byrne’s conspicuous silence this weekend — in response to serious questions that fraud-buster Sam Antar has posed concerning inventory accounting at Overstock.com, which Sam believes could indicate what is known in corporate crimes circles as “earnings management.”

So suddenly Byrne has nothing to say? Not even a convoluted explanation or personal smears? Hmm. Maybe Overstock’s board of directors finally told him to shut his mouth because he was digging the hole deeper.

As discussed in previous posts on Overstock, Byrne and company have said that in the first quarter of 2006, they had a game plan and knew they were going to have to “take medicine” to get rid of junk inventory. In fact, they called it “dumping a bunch of inventory.”

Unfortunately, those comments about their knowledge of the junk inventory weren’t made until much later. Throughout 2006, Byrne and Jason Lindsey actually downplayed inventory concerns. Witness this statement from the April 28, 2006 conference call:

“…we’ve come out of it now, but we did mark things down in order to flush things through. So that hurt our margins a bit.”

Then this statement comes during the July 28, 2006 earnings call:

“So far, it has sold okay. We are getting rid of it and it does not look like we have – obviously, we are more than adequately reserved, I think, for all of it, but just as far as having sold the last of it, so that there is no more drag on margins, we definitely want to have that happen by the end of the year.”

Yet on November 6, 2006, the story changes and Overstock.com management admits that the margins are going to be bad:

“I am going to put some meat on that, because we think that we can dramatically reduce inventory from here. But to move that amount of inventory, core inventory, we are giving great deals, better than — well, we are giving great deals and clearing a whole bunch of stuff out, so we will end with extremely fresh inventory and a much smaller amount than you have ever seen us run with as a fraction of sales….”

“But to do that, to clean out every nook and cranny in the warehouse, is going to require clearance prices on it, so that is why the margins are going to hurt.”

The fact is that if margins are “going to hurt,” then the company was not adequately reserved as they had previously represented.

And then came the results for fourth quarter of 2006. Inventories declined (from $73.3. million to $26.9 million from third quarter to fourth), but the inventory reserves went up to $6.6 million (from $4.5 million in the prior quarter). As a percentage of gross inventories, the increase is even more dramatic. The reserve was previously about 6% of inventory, and it went up to over 24% of inventory.

So all year long, management is singing a song that they have adequate reserves and margins will be impacted, but we have to wait for fourth quarter numbers to see how truly pathetic things really are.

Yet the fantasy goes on during the February 5, 2007 earnings call:

“…I am pleased that the fourth quarter is now over. We have sold it. Our inventory turns are much higher. Our margins are much higher and it really does feel like we have made a lot of progress there. “

Here’s where I remind everyone that throughout 2006, Patrick Byrne and company were saying everything was going to fine with inventory. They made these representations throughout 2006, and then in early 2007 admitted that they knew since the beginning of 2006 that they had a huge inventory problem.

It is clear that although inventory levels did go down throughout 2006, there doesn’t appear to be any progress at all in moving out the junk, despite management’s representations that they did. Sam Antar says:

Overstock.com cannot have two opposing versions of the truth exist simultaneously. If the company’s inventory reserves were accurately stated at the end of the fiscal year at $6.6 million, than no progress was made in reducing the level of junk inventory. If Overstock.com made progress in reducing junk inventory, how can the company report such huge reserves at the end of the fourth quarter?

So which information about inventory at Overstock.com is true? The financial statements and the verbal statements during the conference calls cannot all simultaneously be true. I sure hope the SEC is taking notes.

One thought on “Overstock.com Cooking the Books?”