U.S. GAAP has been around for about 75 years. But in 2008 the SEC declared that companies would start switching to IFRS soon, with all companies using IFRS by 2016. Why the switch? Well some argue that there are two main reasons why we should switch to IFRS:

The switch from GAAP to IFRS won’t be cheap. It’s estimated that it will take a company 2 to 3 years to make the transition, and it’s going to be an awful lot of work.

IFRS is easy to criticize. Allowing management more judgment in applying the principles to their company’s books leaves more room for financial statement manipulation. As a forensic accountant, I can certainly see how abuses may be more prevalent. Just look at GAAP-based financial statements – – the accounts most at risk for manipulation by shady executives are the ones in which management apply estimates and judgment.

Switching the United States from U.S. GAAP to IFRS is desired in the U.S. only by large audit firms, CEOs of large multinationals, and SEC regulators and their staffs.  Investors, rank and file accountants and accounting professors oppose the move.  Audit firm principals and corporate executives stand to profit, one way or another, by billions and billions and billions and billions of U.S. dollars.  It is self-debasing greed.  It is avarice of the corrupted soul.

Let us not be fooled. Accountants and auditors are not in business for altruistic reasons. They don’t exist because of a great love for numbers and a deep desire to help craft the most accurate financial statements ever. They’re in business to make money. And make money they will if companies are forced to move to IFRS.

Large accounting and auditing firms are making scads of money. And this chart from The 2009 Big Four Firms Performance Analysis demonstrates it nicely. 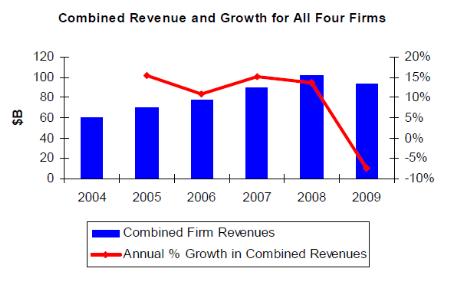 Professor Albrecht notes that Sarbanes Oxley helped the accounting firms make a lot of money, but most of the revenue growth related to SOX was over by 2005. So what is behind the growth since then? Growth in consulting fees.

And what will drive revenue growth in the future? The adoption of IFRS. The amount of money to be made by providing consulting services to companies making the switch will be huge.

And will financial reporting improve? No. In fact, the reliability of financial statements from companies using IFRS will go down because it will be much easier to manipulate earnings.