This morning I was treated to the following tweet directed at me:

The tweet seems meant to draw the attention of those who work to uncover fraud and expose scams, and to support whistleblowers. Similar tweets were sent to a variety of bloggers and media outlets, apparently attempting to drum up support for Seema Kalia. So I started looking…

The tweet led me to this story on the $5 million lawsuit Seema Kalia has filed against Newsweek / Daily Beast and three other media companies, claiming they have libeled her. The lawsuit is summarized in the article:

Seema Kalia, a mom to two children, found evidence of tax fraud when her daughter attended one of New York City’s elite private schools, Trinity. Seema asked questions, got no answers from Trinity, and then was libelled (sic) by The Daily Beast, Village Voice and Gawker as someone making false claims against Trinity Trustees, most of whom have political and social connections to the editors and publishers of the major media that want Ms. Kalia to look bad for making the allegations.

The story started in late 2010 and early 2011, when Seema Kalia alleged wrongdoing by Trinity School in Manhattan. She went on a Twitter tirade that included the following: 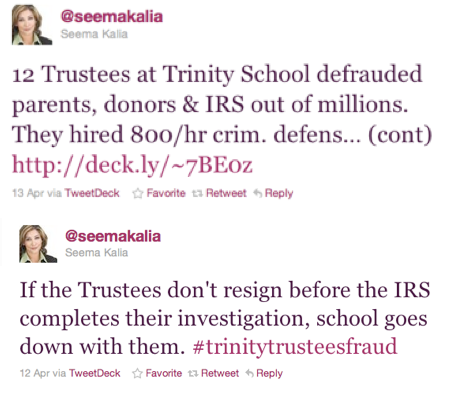 Various blogs and news sites reported about her posts on Twitter, Facebook, and UrbanBaby.  The stories included this one from the Village Voice, and this one from the Daily Mail. The common theme from those writing about this story was that Kalia made serious allegations (in “rambling” and “incoherent” posts), but no one saw any proof to back them up.

She wrote: ‘My daughter was expelled from Trinity School in retaliation for trying to privately inquire about a key employee with false credentials.

‘Most IRS investigations result in convictions because their software base can uncover all bank records of all individuals under the Bank Secrets Act.

‘We spent the next year facing down slander and illegal threats as more and more information was leaked to us about the Trustees’ massive cover ups regarding the school cutting costs in many years to finance a massive and illegal compensation scheme taken from non-Trustee parents.

‘My lawyer reported the erroneous filings to the IRS a couple of weeks.  Almost 5 minutes later I got a letter from the IRS saying they are investigating the school.

‘Both kids have offers from other private schools that have been attempting to intervene to no avail and we have secured other better options for our family.’

On Facebook, she describes herself as: ‘…unhinged, bad at relationships, need to work out & wear too much makeup. In my spare time I enjoy tattling & having v. specific media meltdowns. But I also have flaws.’

Mrs Seema is yet to reply to MailOnline’s request for the IRS document proving Trinity is being investigated for fraud.

The IRS said they would not comment on whether the school was facing an investigation or not as ‘it is not their practice’ to do so.

Nick Summers wrote on The Daily Beast about Seema Kalia’s allegations on April 14, 2011. Summers was critical of Kalia for making the allegations but providing no proof to back them up:

This disgruntled mother has gone beyond drop-off huddles with other moms and dads, turning instead to Facebook, Twitter, and parenting message boards to unleash a series of what are widely viewed as outlandish charges against Trinity’s board, without any hard evidence to support them. But supported or not, her accusations are now percolating through the gossipy private-school community. For an institution like Trinity, ranked the No. 1 prep school in the country and accustomed to resolving its squabbles in private, this is wildly uncharted territory.

But Kalia has instead escalated, going to war with hundreds of posts on Twitter, Facebook, and the rumor-hungry forums of UrbanBaby.com—and offering a whole new set of allegations that Trinity’s trustees have conspired to commit tax and accounting fraud.

Little if any evidence has emerged to support Kalia’s many accusations. Asked repeatedly for documentation or even an explanation of how she came to believe there was financial wrongdoing, she has declined. In an interview and email correspondence, Kalia refused to back up her claims with what could be considered legitimate proof, and she rarely dwelled on any one charge long enough or coherently enough to examine it before moving on to the next. Trinity, for its part, denies each of her charges in unequivocal language.

“All the allegations that I’ve seen are utterly baseless, and absolutely false,” says Trinity’s spokesman, Kevin Ramsey. Told that Kalia had repeatedly questioned on Twitter why Trinity had not denied that it was the subject of an IRS investigation, Ramsey laughed. “I’ll deny it right now,” he said. “We have received no letter. There’s no investigation, there’s no audit, there’s been absolutely no communication from the IRS regarding Trinity School.” An IRS spokesman said that as a matter of policy, the agency does not confirm or deny whether it is investigating any given person or organization. Ramsey flatly denied Kalia’s allegation that Trinity’s trustees voted themselves compensation and tuition breaks. (At tony schools like Trinity, trustees are typically expected to help bring in millions of dollars in donations, not take $35,000 tuition credits for themselves.)

Now, one year later, Kalia has filed this lawsuit, claiming that Summers’s statement that she didn’t provide evidence to back up her claims amounted to libel. (i.e. It wasn’t true and it damaged her in some way.)

Seema Kalia claims she has documents from the Internal Revenue Service to back up her tax fraud claims against Trinity School.  And she claims that she gave them to Summers and he ignored them. According to the article publicizing the lawsuit:

She added that she was rebuffed when she sent reporter Summers the IRS documents that show the alleged fraud and made several attempts to meet with him prior to the article’s publication.

“The arrogance of these outlets not to open the tax documents was shocking,” she said.

I find it hard to believe that Kalia provided Summers actual proof of her allegations. If she sent him anything – – proof or not of her allegations against Trinity School – – I suspect he would have mentioned it.

The article Seema Kalia originally pointed me to says:

Kalia told Law360 Friday that she is really just looking for an apology from the outlets, the school, and the school’s trustees, all listed as defendants in the suit, but felt she needed to file the suit to clear her name and restore her reputation.

“Until it’s cleared up, I can’t go back to work,” said Kalia, who formerly hosted a public affairs television show on a local PBS station. “I really didn’t want it to get to this place.”

What is there to “clear up”? Either Kalia has the proof or she doesn’t. She’s been saying for more than a year that she has the proof…. so why not publish it? The “proof” she says she has should support her claims and essentially vindicate her, right? But I can’t find this so-called proof anywhere.

I asked Kalia for where proof is for her claims, and got this response:

I asked where to find the documents, and received no response… Presumably since Seema has now blocked me on Twitter:

Why is Seema hiding? She approached me, apparently wanting support for her position and her lawsuit. But when I asked for the proof of her original allegations – – proof which she claims to have, and has claimed to have for more than a year – – her response is to block me on Twitter.

It looks to me like the article at The Daily Beast was accurate: Seema Kalia made allegations of tax fraud against Trinity School, and they didn’t see the proof she claims she has. Neither have I.

Despite repeated requests for the documents Kalia alleges prove her claims, she does not appear to have provided them to anyone. It is more than  a year since the Twitter firestorm and the media criticism. The proof should have been produced by now if Kalia wants anyone to believe her, or even take her seriously.

As I tweeted to Seema, I hope she loses, and loses badly. Free speech – – and the right of a blogger to accurately report that an alleged whistleblower has produced no proof of her serious allegations – – must win.

12 thoughts on “Seema Kalia, Trinity School, and Libel (or Not) Lawsuit”