Yesterday ESPN published an article about AdvoCare, Drew Brees Has A Dream He’d Like To Sell You. AdvoCare is a typical multi-level marketing (MLM) company. It focuses on selling a “business opportunity” and uses nutritional products to make it appear as thought they’re not promoting a pyramid scheme. Unfortunately, more than 99% of participants in MLM lose money, making it a “business opportunity” that is even worse than gambling at a casino.

Mina Kimes did an outstanding job of digging into AdvoCare’s empty promises to distributors. It’s a long article, so I’m going to pull out some of the most interesting excerpts for you. Here is one of the most important things to remember: ESPN has nothing to gain from misleading you. They don’t care one way or another if AdvoCare or any other MLM is a legitimate opportunity.  AdvoCare, on the other hand, lives or dies by the public perception… they are fully invested in consumers believing that they push a good and beneficial opportunity.

AdvoCare, which has used athlete endorsers and event sponsorships to cultivate deep ties to the sports world, portrays itself as a company that “offers the average American the chance to make an above-average income,” but, in truth, only a tiny percentage of salespeople ever make significant money.

Slight correction: Only a tiny percentage of MLM salespeople ever make any profits.

The real deal in MLM is the recruiting, not the products:

And while the company claims its primary objective is selling products, many of its distributors tell a different story. ESPN interviewed more than 30 current and former salespeople, the vast majority of whom said their focus, and the focus of their superiors, was on recruiting other distributors. These new members, many of whom are drawn to the business’ strong religious culture or convinced of its credibility by its ties to the sports world, infuse the company with new funds — money that ultimately flows up to the powerful people who walk the stage at Success School.

An example of a failed “business”:

By 2013, Chavez had spent three years trying to build an AdvoCare business. He had taken out a loan on his 401(k) and quit his government job, dropping $15,000 on products that he struggled to sell. He had hosted innumerable parties in his living room, handing out samples to reluctant attendees, and printed business cards with Brees’ face on them. He barely broke even — but he kept at it, convinced that someday he would be the one on AdvoCare’s stage.

“You’re always chasing the dream,” he says. “And it never comes.”

Remember, this type of story is not the exception, it’s the rule.

And what about the pyramid scheme allegations that come up over and over for MLM companies?

Because MLMs reward people for recruiting others, they can run the risk of mutating into pyramid schemes — illegal scams in which new members, who often make big initial buy-ins, are constantly sought so their money can be funneled up to the original members.

And then AdvoCare went into spin mode, because they knew a negative article was coming:

After ESPN contacted AdvoCare to ask questions about the company’s business model, AdvoCare:

This reminds me of Mary Kay Cosmetics and virtually every other MLM. They tout the alleged financial benefits, but when called to account for the millions of dollars lost by hundreds of thousands of consumers pursuing this “business opportunity,” they retreat and say that people either aren’t trying to make money or they just join to get a discount on the products. 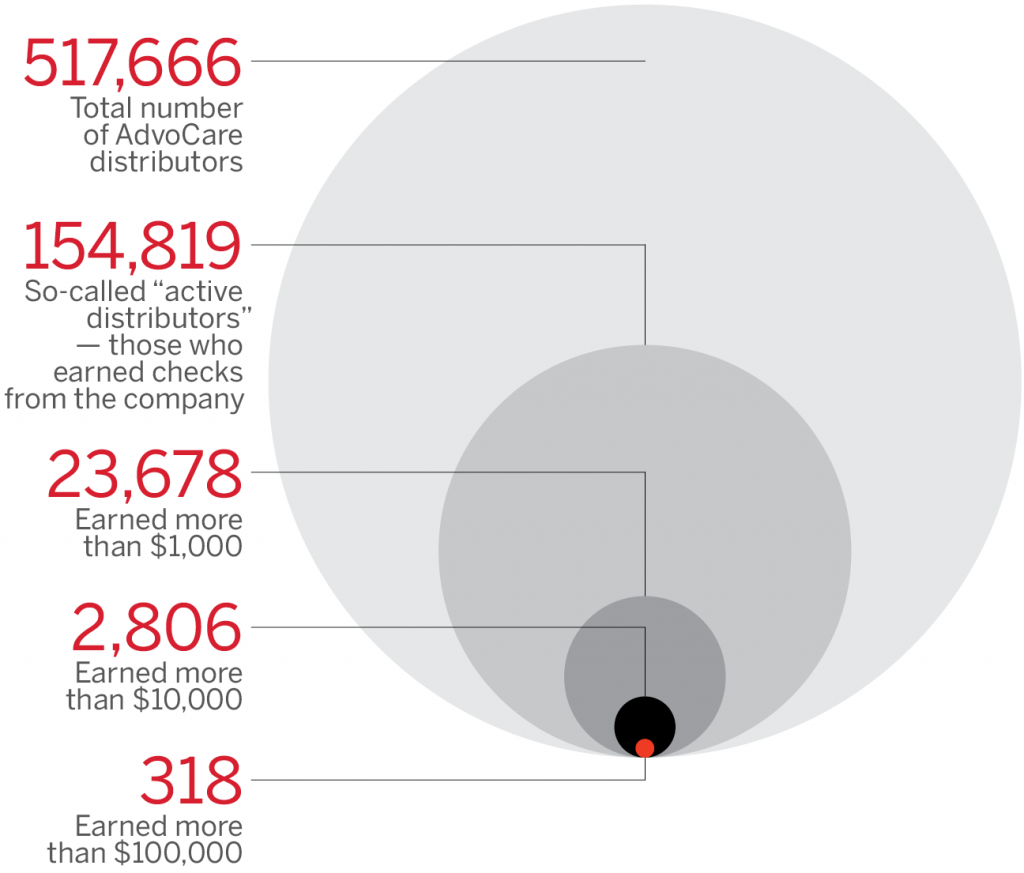 How do multi-level marketing companies act like pyramid schemes? Pyramid schemes pay people for recruiting. To get around this technicality, MLM companies have recruits purchase levels… essentially buying products to qualify for commissions and move up. The person who recruited the purchaser of the products receives commissions that are tied to the product purchase… thereby not technically paying “for recruiting.”

From the ESPN article:

They decided to enter at the “advisor” level, purchasing more than $2,000 worth of products in order to gain access to a 40 percent discount. (Top distributors pitch this as “the fastest, most economic way” to build a business.) By then, Lori had gotten a job at a local utility company, but she was making significantly less than she did before the recession. “I wanted an income supplement,” she says. “I wanted the lifestyle that we used to have.”

Like many distributors, Crossan found it hard to sell the products. She says she moved only three 24-Day Challenges over the course of a year, two of which went to her sister, so she tried to recruit other advisors. This too proved challenging. “People don’t have that kind of money in a small logging town,” she says.

How do they encourage product purchases even if distributors don’t have retail customers? By requiring minimum purchases to maintain levels and/or qualify for commissions:

In order to qualify for commissions each month, AdvoCare distributors must achieve a certain amount of sales volume, a mandate that drives some members to purchase products for the sake of meeting the quota. Crossan wasn’t bringing on new recruits, but she kept buying products, goaded by the people above her in the organization. “They said, ‘You gotta spend money to make money,'” she says. She bought AdvoCare-issued magazines; she listened to prerecorded calls, trying to glean tips from her superiors. At one point, she clicked on a training video that offered scripts for inviting people to mixers. One line jumped out. “It said, ‘I’ve been thinking about you, and you’ve been heavy on my heart.'”

Multi-level marketing companies promote the money-making aspect, despite knowing that almost no on will turn a profit. How do they avoid being called liars? By telling you that it is possible that you will make money. No guarantees are made. But they certainly won’t tell you how little chance you have of turning any sort of profit, much less one that can support your family.

When Crossan and her husband did their taxes after leaving AdvoCare in 2011, they realized they had spent more than $6,000 on products, most of which had expired before they decided to return them. (AdvoCare gives salespeople 30 days to return products or up to a year if they forfeit their distributorship.) Unlike people who had started a business, they had built no equity — it was just money down the drain. “I was like, ‘Holy crap — we went through our savings,'” she says. “‘What on earth did we do?'”

AdvoCare tells distributors to give prospects an official income disclosure statement, which shows how many salespeople reach each level of the company. The numbers are stark: According to the latest statement, the company had 517,666 distributors in 2014, and just 1,209 of them — 0.2 percent — earned more than $25,000 that year; 95 percent earned $1,000 or less. Those figures don’t include profits from members’ product sales, but they also don’t include expenses, which several distributors say outweigh retail profits.

And the ever popular “no one really wants to make money” (despite the fact that the “income opportunity” is what we constantly advertise):

Levy, the general counsel, says many distributors aren’t actually trying to make money — they’re just in it for the markdown: “We have hundreds of thousands of people that join our business, most of them primarily for a product discount.” But even if you include only “active distributors,” i.e. salespeople who have received checks based on their recruits’ purchases or online sales through personal websites they’ve set up and are ostensibly pursuing the business opportunity, the number of distributors earning more than $25,000 rises to only 0.8 percent. (Levy says many of these people also signed up for the discount.)

Even when you find someone who “made good money” in MLM, it’s only because hundreds or thousands below them lost lots of money:

One former distributor, who spoke on the condition of anonymity, says she did make a decent income through AdvoCare. But she acknowledges that almost no one in her downline made money. “It nauseates me to think of the people who spent $3,000 and didn’t make a dime, because they believed me — and the goal, and the dream,” she says. “You catch people in a bad spot who maybe have hope that this could be a way for them to pay for their credit card and their kids, and you exploit them. That’s the bottom line.”

On why you don’t hear a lot of complaints from failed MLM distributors:

According to a 2004 survey conducted by the FTC, victims of pyramid schemes are less likely to complain than victims of any other type of fraud. MLM supporters say few grievances about the companies surface because they are doing nothing wrong; critics counter that discretion is baked into the business model. When people join these companies, they’re often recruited by family or friends, and they go on to enlist others who are close to them. As a result, if they renounce the business, they’re either renouncing their loved ones or admitting that they exploited them.

Former AdvoCare members say loyalty keeps distributors silent — but so does shame, because people who struggle are told, over and over, that they simply aren’t trying hard enough. “If you can’t make money, they blame you,” Crossan says. She remembers one of the mantras that was drilled into her: “They said, ‘You can’t do the minimum and expect the maximum.'”

There’s also little upside to telling people about their negative experiences in MLM. Besides being embarrassed, they’re likely to be ridiculed by current distributors and possibly even sued by the MLM. Remember: MLM promoters have a vested interest in only telling you the good things about their company. They stand to profit if you believe them. The truth-tellers on the other side have nothing to gain. I tell people about the evils of MLM because I want them to know the truth, not because there is anything in it for me. And indeed, there is nothing in it for me financially or otherwise… simply the knowledge that I’ve helped inform people about the facts of this awful “business model.”