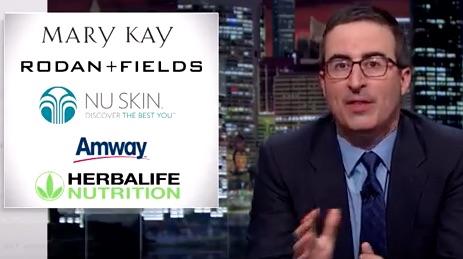 Robert FitzPatrick, one of the foremost experts on multi-level marketing, published a piece entitled “What John Oliver Didn’t Have Time To Say In His Hilarious Exposé Of Herbalife And MLM” on Seeking Alpha. (register for free to read the whole article) As always, he did a masterful job o flaying out the case against MLMs, which are nothing more than elaborate pyramid schemes set up to look like legitimate businesses.

As of the writing of this post, the YouTube video of the complete episode Multilevel Marketing: Last Week Tonight with John Oliver (HBO) had over 5 million views. The program made the point (in a very articulate, yet humorous way) that MLMs are nothing but pyramid schemes.

FitzPatrick expands on the episode:

…essentially, all MLMs are the same. Trickery, lying, and losses, as well as “lack of retail sales”, which were discussed in the show, are intrinsic to a pyramid scheme, including:

I’ve summarized below some of FitzPatrick’s facts about multi-level marketing.