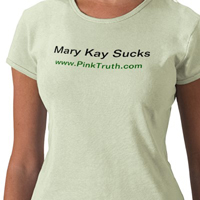 The reason why Pink Truth is telling the “other side of the story” about May Kay is because the company’s success depends so heavily on half-truths, long-running myths, and outright deception. Of course, Mary Kay Inc. isn’t directly involved in these deceptions, but they’re aware that their representatives are telling tall tales in furtherance of Mary Kay domination of the world. We want to give the rest of the story at Pink Truth!

Representatives are notorious for telling lies like “Mary Kay is Taught at Harvard!” and “You can start your own business for only $100!” and other fairy tales.

Below is an excellent example of how women repeat untrue things about Mary Kay ad nauseum, and those who hear these lies are none the wiser. Without sites like Pink Truth, they’d have no way to debunk these myths and find out the truth. This comment was left by a visitor to this site:

WOW! Funny how this article is supposed to “educate” women to make a good decision… but yet it says NOTHING about what Mary Kay is founded on: God first, Family 2nd, Career 3rd… I know literally hundreds of women who bring in tens of thousands of dollars a month, who have travelled around the world for free, and whose husband retired in their 20’s or 30’s and stayed home full time with their family BECAUSE of their wives’ MK careers. I know mothers who get to be at every soccer game, every PTA meeting, and anything else BECAUSE of their MK careers. I can’t even begin to list all of the things I find wrong with this “article” What an amazingly one-sided, narrow-minded, un-researched blog.

This woman claims she knows hundreds of women bringing in tens of thousands of dollars a month via Mary Kay.  That is a flat-out lie, and here’s the data to prove it.

Every month Mary Kay puts out a publication called Applause, which is the promotional magazine they send out to consultants. In that magazine is a rundown of the top commission earners in the company. This data proves beyond a shadow of a doubt that hundreds of women are not bringing in tens of thousands of dollars a month in Mary Kay Cosmetics.

Here are two pages from the December 2009 Applause Magazine. These pages show the highest earners at the level of National Sales Director (NSD) and Sales Director (SD). I added up how many women made $20,000 or more (that’s tens plural, right?) in commissions for the month of August 2009, which is what is presented in the December issue.

But wait! The Mary Kay supporters may say that August is one of the lower earnings month for all of the pyramid participants! In that case, let’s take a look at June 2009 earnings. That is always the highest earning month, because the upline is putting extreme pressure on the downline to buy more and more product to “help the team” achieve a goal for the end of the fiscal year (June 30).

Here are the two relevant pages from the October 2009 Applause Magazine. The women making $20,000 or more in the highest earning month of the year for Mary Kay representatives:

Again getting rid of the plural and looking at who made $10,000 or more:

You think that sounds impressive? Well remember that these figures are gross income. All of their business expenses have to come off that figure. And don’t let anyone convince you that the expenses are low. At this level of the pyramid, the expenses are high.

So please, let’s stop the lies about the earnings in Mary Kay. Almost no one makes an actual living from Mary Kay, and even fewer make what might be considered an “executive level income.”