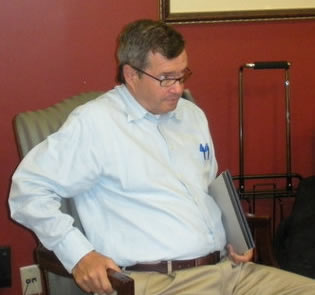 I am currently on the receiving end of a SLAPP suit, thanks to my good friends at Medifast (NYSE:MED) and their scam-like pyramid-like multi-level marketing division Take Shape For Life (TSFL).

It goes like this… Someone criticizes your company. You get mad. You decide to use your millions or billions of dollars to shut them up. But more importantly, it shuts up anyone else who would dare to criticize you or your company, lest they should also be on the receiving end of a lawsuit they can’t afford to fight.

The case bringing attention to SLAPP suits today involves real estate developer H. Walker Royall, who got mad about a book written on one of his projects. He sued Carla Main, the author, and her publisher, a guy who wrote a blurb praising the book, someone who reviewed the book, and the newspaper that printed the review.

The article about this crazy lawsuit does an excellent job of explaining SLAPP suits and why more legislation protecting those sued is necessary:

SLAPP plaintiffs use the court system to bury opponents in a crush of legal fees and paperwork of Bleak House proportions. They are not about winning damages. They usually don’t expect to be successful, and their targets often don’t have the money to defend the case. For the wealthy like Royall, and corporations equipped with teams of lawyers and swollen legal budgets, the cost-benefit analysis is easy: Foot the expense of a lawsuit through whatever means available — usually a defamation or libel claim — and enjoy the benefit of intimidating current and future critics into silence.

Anti-SLAPP motions in cases such as this generally stop the litigation process all together and force the plaintiff to prove a probability of prevailing – – before the enormous costs of the discovery process begin. In Texas (where this suit is), however, this type of motion isn’t available and the defendant is left to deal with all the legal expenses immediately.

In California, where Medifast filed suit against me and my co-defendants, anti-SLAPP motions are supposed to stop the process immediately. In my case, however, the judge made the unfortunate decision of allowing Medifast to conduct discovery before responding to our motion, as the law requires.

What’s so amusing about this is the fact that Medifast asked the court to allow discovery because they couldn’t possibly respond to our motion (i.e. prove their case the way the law requires) without first doing discovery.

Hello! This is the whole point of anti-SLAPP legislation…. to force plaintiffs to know what they’re doing before they file suit against an innocent defendant.  In this case, Medifast alleges defamation… that the defendants said untrue things about the company. The defendants did, indeed, discuss facts and figures about Medifast and their TSFL “coaches.” And pray tell, who is in the best position to know if those facts and figures are true or false? Medifast, of course.

Nonetheless, Medifast successfully argued to the judge that it had to conduct expensive and time-consuming discovery against me before they’d know if they could actually prove their case.

I already know the answer to the question: Medifast can’t prove their case against me because they have no case against me. Everything I wrote about the company was either:

a. A simple reprint of what other authors wrote about the company, posted on my site to give consumers a chance to read it and draw their own conclusions.

c. A statement of opinion protected under the First Amendment of the United States Constitution.

To make things interesting, Medifast added in allegations of some vast conspiracy between the defendants to harm the company.

I know the answer to that question too: I was not involved in any conspiracy. Working with colleagues on a project of mutual interest does not automatically create a conspiracy. Medifast has zero evidence of my involvement in any conspiracy because no such evidence exists or ever existed. There is no conspiracy.

And now that Medifast has had the benefit of discovery, and has seen from more than a thousand pages of documents I produced that there is neither a conspiracy, nor any defamation, they should quickly drop me from their suit, right?

Wrong. They have to make sure that no one dares to speak out about Medifast and criticize its business model again. The only way to do that is to continue to drown the defendants in legal fees and the burdensome process of litigation. That will teach us a lesson… and everyone else, too!