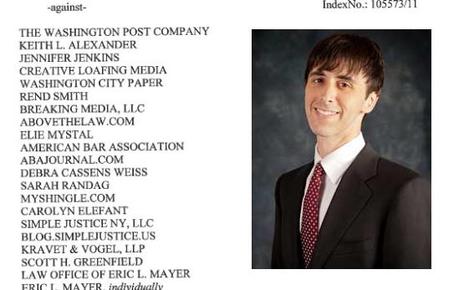 While responding to the nonsense of Rakofsky and his almost former attorney Richard Borzouye, Eric Turkewitz writes this brilliant commentary on why he and other defendants (mostly lawyer bloggers) think it’s important to write about clowns like Rakofsky: END_OF_DOCUMENT_TOKEN_TO_BE_REPLACED

The internets are all abuzz with the story of Joseph Rakofsky, young attorney with almost no experience, prone to inflating his credentials on his (now removed) web page, who is suing a large portion of the internets in what has been dubbed Rakofsky v Internet.

It all started when the Washington Post reported that the judge in a murder trial booted Joe Rakofsky as counsel for the defendant because he was so inept.  The story said Rakofsky’s incompetence was reason enough to grant a mistrial. The story was told over and over again by bloggers, and soon Joey was suing them all! END_OF_DOCUMENT_TOKEN_TO_BE_REPLACED

If there is any quicker way to bring negative attention to negative news, I don’t know of it. Joseph Rakofsky seems to have a lock on ruining his own career by “suing the internet.”

It all started with Rakofsky, a new-ish lawyer who was representing Dontrell Deaner in a murder case in Washington, D.C.  The Washington Post reported in its article D.C. Superior Court Judge Declares Mistrial Over Attorney’s Competence in Murder Case: END_OF_DOCUMENT_TOKEN_TO_BE_REPLACED