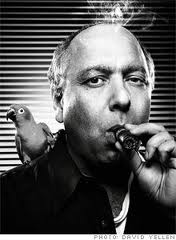 According to Sam Antar:

In a previous 8-K report, Overstock.com claimed that $13.7 million of revenue and $2.1 million of net income shifted from Q4 2007 to Q1 2008 as a result of the SEC imposed revenue recognition change to comply with GAAP, and that likewise offsetting amounts would be shifted out of Q1 2008 to Q2 2008. However, by failing to restate its Q1 2007 financial reports, we cannot determine the comparability of Q1 2008 versus Q1 2007. We simply don’t know what Q1 2007 would have looked like if it had been reported in accordance with GAAP.

And the accounting rules are pretty simple in this regard: If you’re going to compare numbers, you have to make them COMPARABLE. You just can’t take numbers that were calculated with different methodology and pretend they mean the same thing.

Unless you’re Patrick Byrne, I suppose.

Sam cites an article in the CPA Journal:

Sam does some additional detailed analysis of Overstock’s first quarter figures, and basically comes to the conclusion that there was no “turnaround” like what was touted by Byrne.

What did this earnings manipulation do for Overstock’s stock price? The opening price was around $14 per share, and it closed at $18.47 per share, almost a 32% increase for the day.

And Sam thinks the company released earnings figures a little earlier than usual, and he thinks he knows why:

On Friday April 19, all put and call options were due to expire at the close of the market. Patrick Byrne’s disdain for short sellers, and just about any person or entity that has a skeptical position or opinion of his company is well known. For example, when asked about a short squeeze in December 2003 Patrick Byrne replied, “when opportunities come along where we can knee the shorts in the groin, that’s always good for fun and amusement.”

Apparently, Overstock.com wanted to bury the news of a criminal investigation of the company’s advertising practices by the early issuance of an earnings release that overstated its financial performance. In the process, the stock would rise and cause losses to short sellers as their put options expired.

Wow…. this is some pretty damaging stuff, and Sam makes a very strong case. I wonder how surprised Patrick Byrne is that Sam unraveled all of this?

…this is easily the most significant of the many accounting and disclosure irregularities that Overstock has committed over the past two years.

I happen to agree. I hope the SEC is listening.