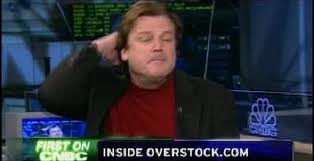 In the past, I’ve discussed the improper EBITDA numbers reported by Overstock.com (NASDAQ:OSTK). It comes as no surprise that the con game continues with Overstock’s latest reported numbers.

The SEC rules are very simple. “EBITDA” refers to a specific calculation, which is “earnings before interest, taxes, depreciation, and amortization.” Overstock.com and CEO Patrick Byrne have taken liberties with this number, in violation of guidance provided by the SEC on the issue.

Here’s the SEC’s explanation of how EBITDA should be calculated:

Question 15: If EBIT or EBITDA is presented as a performance measure, to which GAAP financial measure should it be reconciled?

Answer 15: Because EBIT and EBITDA exclude recurring charges, companies should consider the answer to Question 8 if they intend to use EBIT or EBITDA as a performance measure. If a company is able to justify such use, EBIT or EBITDA should be reconciled to net income as presented in the statement of operations under GAAP. Operating income would not be considered the most directly comparable GAAP financial measure because EBIT and EBITDA make adjustments for items that are not included in operating income.

Sam Antar pointed out in the past that the SEC even clarified this in an opinion issued to CGG Veritas:

With regard to your disclosure of a non-GAAP measure labeled EBITDA:

The acronym EBITDA refers specifically to earning before interest, tax, depreciation and amortization. However, your measure also adjusts earnings for stock option expense. We will not object to your using such a measure as a liquidity measure but request that you rename it to avoid investor confusion.

Yet the EBITDA con game continues at Overstock.com, as the company materially inflated their EBITDA figures by using an erroneous method of calculating it. Here’s what Overstock calculated:

And here’s how the numbers should have been calculated:

To summarize the numbers as reported in Overstock’s fantasy land and as required to be reported under SEC rules:

Voila! In the blink of an eye, Overstock goes from the reality of negative EBITDA for the second quarter, to the fantasy of positive EBITDA.

EBITDA is overstated by $1,545,000 for the quarter and by $4,566,000 for the trailing twelve months. This appears to be a material misstatement to me, and is keeping in the company’s pattern of materially overstating EBITDA in their reports to investors.

I keep wondering why Pricewaterhouse Coopers doesn’t catch this material error in calculating a figure that is heavily touted in reports to investors. Rumor has it that they review the quarterly reports, but this makes me wonder.

But as Gary Weiss points out, maybe the SEC doesn’t even care about Overstock.com’s violations of securities laws anymore, in which case I guess Overstock can just report whatever numbers they want to.

I am beginning to believe that our present SEC is not of the same caliber that I feared as the criminal CFO of Crazy Eddie in the 1980s. They are overwhelmed and under-resourced. Instead, they using their highly taxed resources to chase delusional conspiracy theories such as those blaming short sellers on problems related to the subprime crises effecting Fannie Mae and Freddie Mac. I suggest that you read Joe Nocera’s blog post entitled, “First, Let’s Kill All Short-Sellers.” Perhaps that explains why companies like Overstock.com can thumb their noses at SEC rules while the SEC drops investigations of such companies.