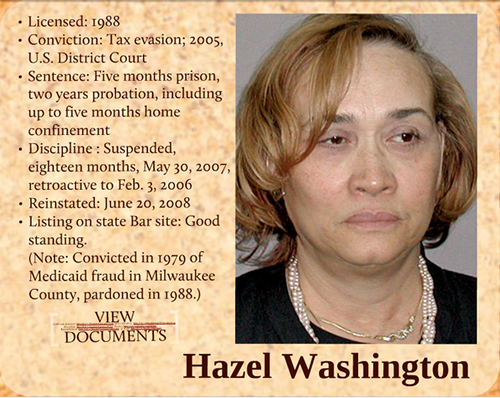 I can’t say I’m shocked. Disgusted, of course. But not shocked.

Hazel J. Washington, two-time felon, had her Wisconsin law license reinstated by a June 20, 2008 order of the Supreme Court of Wisconsin. The most hilarious part of their decision is their reference to her morals:

Although the referee’s report discussed a number of concerns raised by the Office of Lawyer Regulation, the referee found that Attorney Washington had satisfied the requirements for the reinstatement of her license to practice law in Wisconsin. The referee found generally that Attorney Washington had proven that she has the moral character necessary to practice law in this state, that her resumption of the practice of law would not be detrimental to the administration of justice, and that she had complied with the terms of her suspension and the requirements that accompany a suspension.

I cannot believe the standard for getting back your law license is so low. Hazel originally got a law license only after a pardon by the governor on two felony convictions for which she served time in prison in the 1970’s. Just a little case of fraud. According to the decision:

And then she was convicted on fraud charges again, this time income tax fraud. According to the Supreme Court’s decision:

The federal authorities chose to charge Attorney Washington with only one count of tax evasion for 1998, although in her federal plea agreement Attorney Washington admitted that she had engaged in similar tax evasion for 1999 and 2000. The United States District Court for the Eastern District of Wisconsin accepted her guilty plea to the single count charged. The district court ultimately sentenced her to five months of imprisonment and two years of supervised release, 150 days of which were to be served in home confinement.

After the entry of Attorney Washington’s guilty plea, this court summarily suspended her license to practice law in this state, effective as of February 3, 2006.

Oops. Just a little failure to report her earnings and pay taxes on it. She pleaded guilty to one charge of tax evasion, but actually was caught for three years’ worth of fraud. More prison for Hazel.

Wisely, the Office of Lawyer Regulation (OLR) opposed reinstating Hazel’s law license. She couldn’t even be honest with them when trying to get her law license back:

The referee also discussed the OLR’s contention that Attorney Washington had misrepresented a number of items in her responses to the OLR’s reinstatement questionnaire. For example, the OLR claimed that Attorney Washington had failed to report income from the sale of a piece of real estate in October 2006, although she had shown a gain from a similar real estate transaction that had occurred in April 2006.At the reinstatement hearing, Attorney Washington explained that she had not listed the capital gain from the second sale because the IRS had immediately seized the funds as partial payment for back taxes.The referee noted that the OLR appeared to be satisfied with this explanation.

Ah yes… always an excuse why Hazel didn’t follow the law. She forgot. She was confused. She thought x, y, or z. (Or possibly the rules just don’t apply to Hazel in her own mind?)

But the referee thinks Hazel is reformed now:

In the end, the referee concluded that Attorney Washington had demonstrated the necessary moral character to practice law in this state and had shown that her resumption of the practice of law would not be detrimental to the administration of justice or subversive of the public interest.

The decision by the Wisconsin Supreme Court minimizes the most recent fraud conviction:

In a similar vein, it is worthwhile to note that the criminal activity that led to this suspension of her license to practice law in Wisconsin did not directly involve the practice of law. Rather, it involved a matter in her personal life, her obligation to report her income accurately and to pay income taxes. Although criminal convictions about personal matters can certainly reflect adversely on a lawyer’s honesty, trustworthiness or fitness as an attorney and can merit a suspension of the lawyer’s license, see SCR 20:8.4(b), such convictions do not always render an individual permanently unfit to practice law.

Here’s what puzzles me: One would think that after spending time in prison for fraud once, Hazel would have learned her lesson. Clearly she did not. And her most recent fraud is egregious. How on earth does one come to the conclusion that Hazel has any morals, let alone enough morals to be a licensed attorney?

When state officials allow someone like this to practice law, they devalue the law licenses of all the good and honest attorneys in the state.