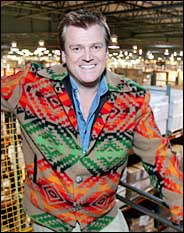 Too bad the “improvement” was really an “un-improvement” (to quote noted investigative reporter Gary Weiss). The loss of $2.1 million was phony, because the company used $1.9 million of prior period gains to pump that number up, plus another $1.9 million of gains from a buyback of debt issued in 2004 under questionable circumstances.

The “gain” from the buyback of the debt is an accounting gimmick because the financial statements issued just prior to the debt offering have been restated twice since the debt offering. Sounds to me like those debt holders participated based on phony financials.

The problem with the $1.9 million of prior period gains isn’t quite as straightforward. Sam does a good job of laying out all the details, but here is the Cliff Notes version…

For about the trillionth time, Overstock.com has found an accounting error that affects the prior period financials. Going back just to 2003…. you see that every single quarter has had accounting errors which mean the financial statements are not correct.  The obvious conclusion a reader should draw is that management at Overstock.com cannot keep an accurate set of books, and anyone who looks at their financial statements and makes any decisions based on those is an idiot.

In the fourth quarter of 2008, Overstock.com reported a $1 million profit, but that was phony because it include a gain of $1.8 million related to underbilling fulfillment partners in prior quarters. Instead of going back to those prior quarters and restating the financial statements, Overstock.com shoved that entire gain in the fourth quarter, likely because management knew that particular quarter needed to show a profit.

Had Overstock.com reported their financials correctly, the fourth quarter of 2008 would have been the 16th consecutive quarter of losses, with a $800,000 loss instead of the phony $1 million profit.

On a stock message board Patrick Byrne launched into a convoluted — and wrong — explanation of why the company handled the underbillings the way it did. As usual, he should be ignored. The company made up a different explanation of its accounting for this error in a filing with the SEC, and that explanation (a “gain contingency”) is bogus as well.

As Sam Antar explains, a gain contingency can be used when a company isn’t sure about how much will be collected. But it’s not used in this situation, when we’re talking about billing customers. Billing and collecting from customers involves revenue and receivables, not “gains” in accounting terms. There was no gain contingency involved here, and Overstock.com simply made this explanation up.

So instead of going back to the periods in which the underbillings occurred and fixing them, Byrne and Company essentially created for themselves a cookie jar reserve….  using those gains in a later period when they really needed them… such as fourth quarter 2008 when the company was dying to show a profit.

In quarter one of 2009, Overstock.com reported even more accounting problems in the form unbooked refunds due to Overstock from a freight carrier, which related to the fourth quarter of 2008. By now you’re probably thinking that Overstock.com has a bunch of kindergarteners working in their accounting department. Well, that’s probably the skill level of their employees, anyway.

This error, along with more gains from underbilling of fulfillment partners (that old issue that created the fourth quarter of 2008 fudged numbers) allowed Overstock.com to inflate first quarter earnings by $1.9 million.

Don’t laugh too hard at Patrick Byrne’s explanation of the repeated accounting errors and improper treatment of those errors, as reported by Lee Webb of Stockwatch:

“We just keep squeezing the tube of toothpaste thinner and thinner and finding new stuff to come out,” Mr. Byrne remarked during the conference call after chief financial officer Steve Chesnut said that the underbilling and overbilling had been found “as part of good corporate diligence and governance.”

Good corporate diligence and governance? Is this guy for real? How about having an accounting system that prevents errors from occurring every quarter?

Of course, Overstock.com management has to explain away why Sam Antar is finding all these manipulations and irregularities in their financial reporting. They can stalk and harass him all they want, call him a criminal all they want, but there is no explaining it away. The numbers don’t lie. Overstock.com just always counted on no one being as thorough as Sam.

One more note… I find it amusing that Patrick Byrne, wacky CEO and conspiracy theorist can get all sanctimonious about accounting rules when he’s wrongly reciting the rules on a stock message board…. and more importantly… when his own company can’t accurately keep a basic set of accounting records.