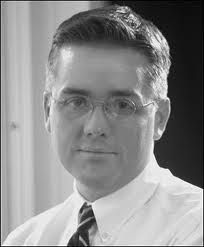 Seems that Byrne’s paid thug, the eternally nauseating cyberstalker Judd Bagley, posted a list of critics of Overstock and Byrne, along with a spreadsheet of their Facebook friends. The list contains 7,483 names, mostly people in the media and friends thereof, their relatives and friends — all to be tracked, stalked and lied-about by Bagley and Byrne’s other pigs, down to the last babe in arms. Still more issuer retaliation and critic-harassment from my favorite corporate crime petri dish.

Evidently it was first noticed by Reuters columnist Felix Salmon on his Twitter feed, and then spread like wildfire among people who don’t ordinarily follow Byrne and his nutters.

Gary Weiss is exposing the pretexting scam used by Judd Bagley to get access to the friend lists of people on Facebook. Often users have their accounts set up so that you can’t see their friend lists unless you’re already a friend of theirs. So why not set up a fake account and try to friend the people he wants to stalk?

That’s exactly what Bagley did.

He set up an account for one “Larry Bergman”, complete with the picture above. He filled in some telltale details, such as the email address [email protected] and he claimed he was an employee of Goldman Sachs. 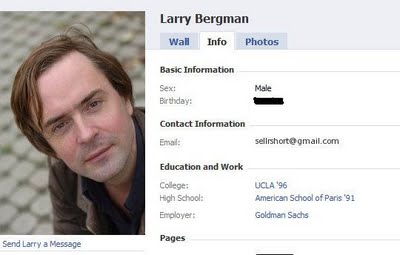 “Larry Bergman” then proceeded to friend people on the Overstock.com enemies list because he wanted access to their friends lists. And he didn’t stop there. He even went so far as to try to friend family members of those on the enemies list. The data he collected from the people he duped into accepting his Facebook friend request went into a database and has been shared with the world. How’s that for slimey?

This guy tried to friend me three times on Facebook. I had no idea who he was and ignored his requests. But others accepted and thus Bagley got access to their Facebook data as if he was a friend of theirs. And believe me, none of the folks targeted by Bagley ever would have accepted a friend request from him if he had been truthful with his identity.

And Facebook makes it hard to protect your list of friends. After all, being a social networking site, they want you to see the friends lists of others so you can add more friends, and thus the participation grows virally.

But it gets worse. Gary Weiss actually had his Facebook account hacked into right at the same time this whole Larry Bergman thing was going on. He writes:

Oh, and one thing I almost forgot to mention: before I got the friend request from “Bergman,” I found that somebody — gee, I wonder who? — hacked into my Facebook account and uploaded photographs of “guilt-by-association” presentations Bagley has drawn up over the years, one of which was made the picture associated with my account. Now that ain’t legal. And yes, I will prosecute.

But here’s the best thing about this whole pretexting project of Bagley and Byrne: It completely disproves exactly what they were trying to prove with the project. Their theory was that anyone on their enemies list who was “friends” with one another on Facebook must be part of a conspiracy. After all, Facebook is the perfect tool for co-conspirators to show love for one another, Bagley would have you believe.

Except the fact that people were accepting the friend request of a fake person named Larry Bergman, shows that people on their friends lists don’t even have to exist to get there. They may have “friends” on their lists that they’ve never met and don’t even know. Which completely disproves the theory that “friends” on Facebook are automatically part of a conspiracy.

What idiots. Who in their right mind wants to shop at Overstock.com when this is the kind of nonsense that CEO Patrick Bryne promotes and pays for? Do you really think any of your private information is safe with them? Do you want even one cent of your hard earned money to go to sleazeballs like this?