I have written plenty about Milwaukee Public Schools and their failure to educate children, despite their out-of-control spending. Teachers and administrators always claim that more money is the answer to all their problems. And the money is for the children!!!

This is obviously not true:

When the poor quality of U.S. education is pointed out, we are frequently told that more should be spent on the government schools. But such claims are fallacious. Since World War II real (inflation-adjusted) spending per student has increased about 40 percent per decade, or about doubled every 20 years (Figure 2).(6)

Despite all of this spending, students have lower levels of achievement than ever before.

Here are the latest numbers on the MPS historical spending and budget for the next school year: 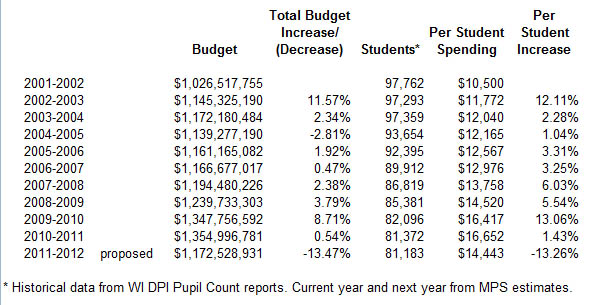 Spending for next school year is going to go down, but only because Governor Scott Walker has been brave enough to force a change that has been needed for a long time. The last two school years, Milwaukee Public Schools has spent and average of $16,500 per child. That is projected to go down to $14,443 per child next school year but: (a) I’ll believe it when I see it, and (b) that is still a huge amount.

How much are other school districts spending? Check out this table, with states ranked by how much they spend per child. If Milwaukee was a state, its 2008-2009 spending would have put it in 8th place. The spending in the next two years would have put Milwaukee almost at the top. (I realize this isn’t a completely fair comparison, because state data includes rural areas, which often have lower per student spending and therefore lower the state average.)

And those figures might even be lower than the true level of spending. According to this article, school districts like to exclude costs from their calculations. If they included all of the real costs of providing education (without accounting tricks), the per pupil costs would be 25% to 100% higher. Another article reports the same issue with public school reported spending versus actual spending.

Of course, spending is not correlated to results in any way. (Debunking the popular battle cry of the teachers’ unions that more money is needed.)

In fact, Education Department figures show that the average private elementary school tuition in America is less than $2,500. The average tuition for all private schools, elementary and secondary, is $3,116, or less than half of the cost per pupil in the average public school, $6,857. A survey of private schools in Indianapolis, Jersey City, San Francisco, and Atlanta shows that there are many options available to families with $3,000 to spend on a child’s education. Even more options would no doubt appear if all parents were armed with $3,000 vouchers.

Of course, the educational costs of private schools are not covered by tuition alone. There are supplemental sources of funding, so the total cost of educating children in private schools is higher than the figures cited above. Still, it costs much less to educate a child in the average private school.

So where does all the money go in MPS? I have no idea. The average classroom in MPS accounts for about $500,000 of spending. Check out how I think this money could be spent (starts about halfway down the article). I gave each classroom all kinds of resources and equipment, and still couldn’t spend all the money.