I’ve written previously about the bankruptcy of Jennifer “MckMama” McKinney and her husband Israel McKinney of Kieran’s Contracting. Jennifer was once a popular mommy blogger at mycharmingkids.net and mckmama.com.

Until the United States Bankruptcy Court got her number and decided to take action on allegations of fraud.

Jennifer Howe Sauls McKinney has a colorful history of lying to the internets about all sorts of things, most notably her debts and her alleged repayment of said debts. You can read here all about how she lied about having paid the overdue taxes owed to the Internal Revenue Service, and other ways that Jennifer was caught red-handed.

Following a very damaging creditors’ meeting in which MckMama was caught in her lies, trustee Gene Doeling initiated an action in bankruptcy court to deny the bankruptcy and take possession of assets that were not disclosed by the McKinneys in their bankruptcy filings.

Israel and Jennifer McKinney never filed a response to the allegations of the trustee, suggesting to me that Mr. Doeling was right on the money with his accusations. Pun intended.  One of the assets Mr. Doeling was asking the court to allow him to confiscate and sell (in order to pay creditors) was MckMama’s blog, My Charming Kids. That little piece of internet real estate was believed to have substantial value based on the amount of traffic the site got.

On September 24th, Jennifer McKinney made the big announcement that she was closing her blog:

On one hand, this is a decision that’s been a long time coming. On another, it’s not. I always knew I wouldn’t blog forever. But how would I stop? When? How will I know? But now, this month, today, this week….well, the timing right now just seems perfect. Utterly perfect. Too perfect to pass up, actually. So my husband and I decided that it’s time.

Except the McKinneys didn’t really “decide” to divest themselves of the MckMama website. The bankruptcy court intended to take it it, but Jennifer McKinney could never come clean to her readers.  She had to make it seem as if everything was rosy and this was her choice:

And this blog? We just don’t see it in our future. We look into the days, months and years to come and we see a lot of things. But my blog? It’s not there. In its place are other things. More peace, togetherness, stillness and serenity. More love, adventures, excitement and maybe more children. More God, solitude, privacy and security.

Of course, Jennifer is going to focus on her multi-level marketing “business” with Xyngular instead of blogging: 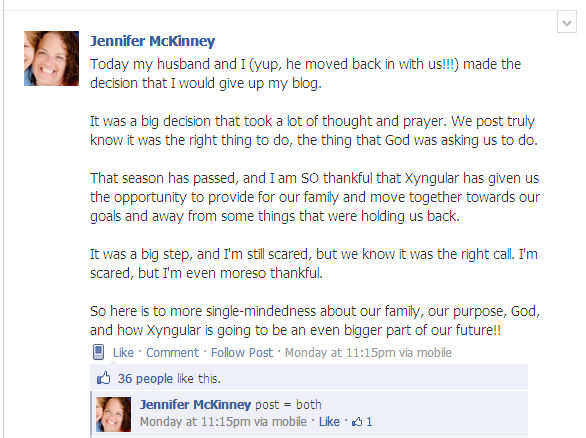 So the happenings in the bankruptcy and the denial of discharge proceeding carry on, and MckMama’s readers are none the wiser. It hasn’t occurred to many of them that Jennifer is just as active with Facebook, Twitter, and Instagram (if not moreso) than she was with her blog. There is no real change in her trainwreck of a life… still the same obsession with attention whoring on the internet while lying about her life.

The only difference is the blog is gone for reasons related to lies the McKinneys told in trying to ditch out of $725,000 in debts they incurred while being reckless spenders. I don’t believe for one minute that Jennifer is done blogging, and sources state that a new blog has been established and will have its live debut soon. This appears to be a very carefully planned segue to a new blog, with no apparent ties to the old blog, so the naughty old bankruptcy trustee can’t possibly lay claim to this asset that didn’t exist at the time the bankruptcy was filed.

This week the clerk of the bankruptcy court filed a notice for all creditors of Jennifer McKinney, Israel McKinney, and Kieran’s Contracting. It’s time to line up to get their share of the proceeds of the confiscation and sale of the McKinney’s assets. Had the McKinneys been honest in their bankruptcy filing, nearly all of their assets would have been exempt, meaning they could not have been taken for the benefit of their creditors. However, because they failed to disclose certain assets and were dishonest in their disclosures, the trustee has sought to take possession of those assets and use them to pay creditors.

Each creditor will likely get pennies on the dollar. But if things go the way they should, the bankruptcy of the McKinneys will be denied, and they will be saddled with these debts into infinity. The creditors can continue to pursue Jennifer McKinney and Israel McKinney for what they are owed. The creditors can garnish wages and levy bank accounts until the debts are satisfied.

For once, it appears that the system may truly work, and dishonest people will be held to account and made to pay. And that, my friends, is a wonderful season.