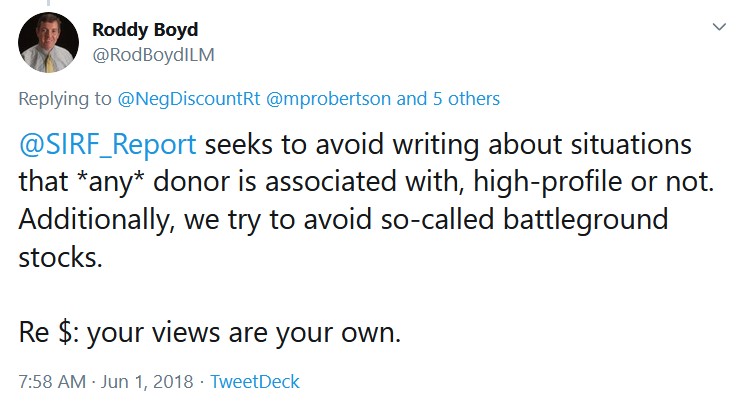 Overstock had been a company of interest to Roddy in the past. So it’s reasonable to think that he might want to comment about the shenanigans involving Cohodes and Overstock. But that wasn’t going to happen after he took Marc’s very large sum of money. 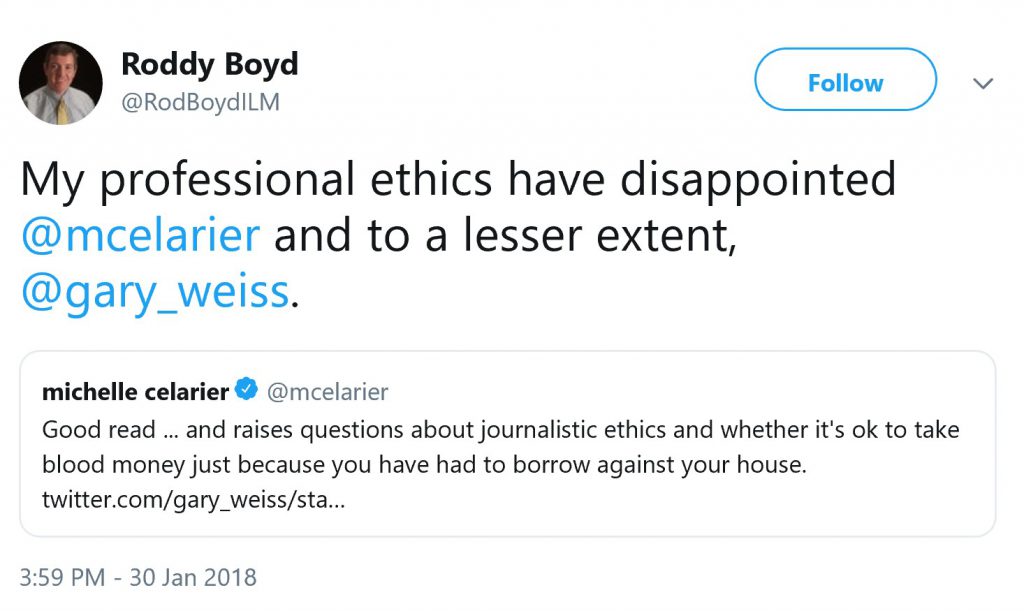 Right off the bat, we have terrible optics. Lots of people knew about the Overstock/Cohodes controversy. And many of them knew Roddy had things to say in the past. So people are going to question the donation when they know Roddy was an Overstock critic, and Cohodes was a critic turned ally.

Lack of Transparency by Boyd

But Roddy made it worse by not disclosing that the gift from Marc was in the form of Overstock shares of stock. He made it appear that it was a cash donation. And he asked people to keep quiet about the the fact that the donation was Overstock stock. Why keep it a secret? Because Roddy knew there were all kinds of ethical problems. He foolishly hoped no one would find out the details of the Cohodes contribution to SIRF.

Roddy says “Between us.” Why between us? Why keep it quiet? 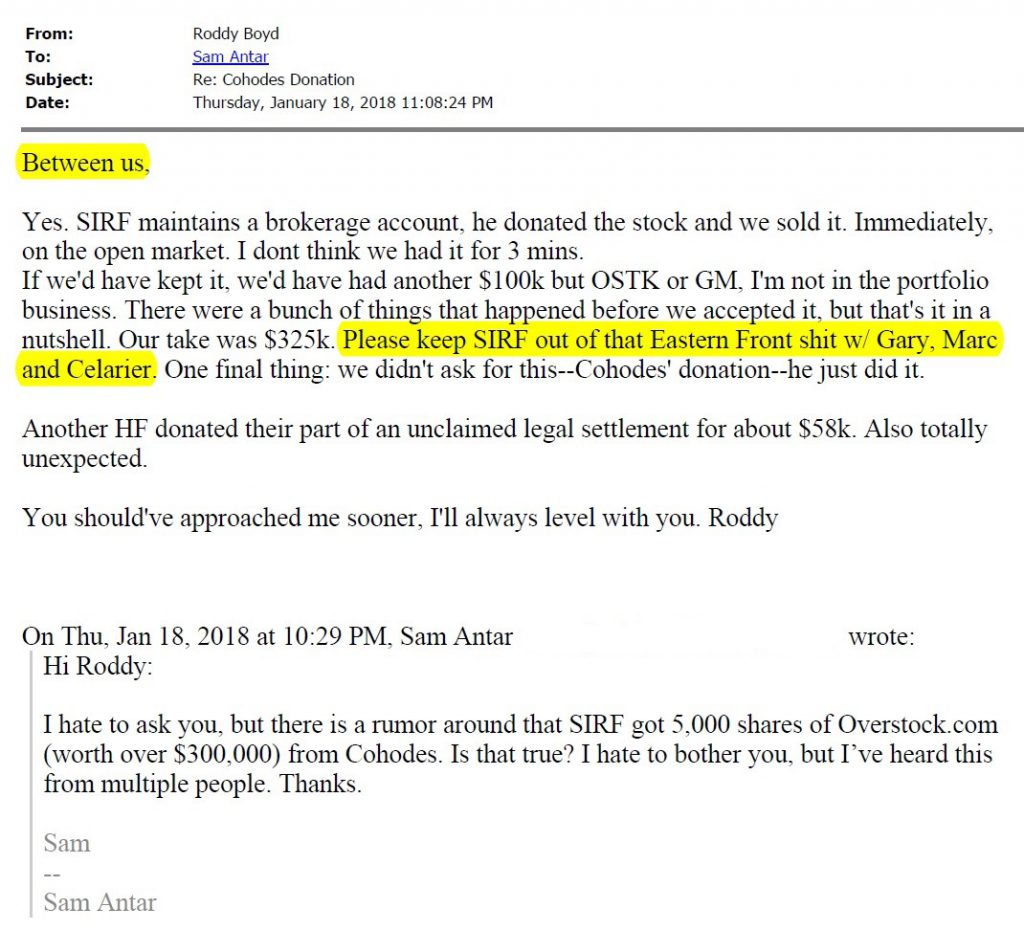 Once the cat was out of the bag and a rumor was floating around, THEN Roddy finally disclosed the little detail that he received $329k of Overstock stock from Cohodes. (Also, SIRF’s income tax return for 2017 failed to report non-cash contributions, as noticed by Gary Weiss. The copy of Form 990 currently available on SIRF’s website has this corrected.)

I suspect the donation was in the works for months before it actually happened. And then right after Cohodes lined Boyd’s pockets, SIRF published an article about WireCard, a target of Cohodes’s good friend Fraser Perring. Is that really a coincidence?

Last week, Boyd fancied himself “exposing” Fraser Perring as a liar. Oh my! SIRF had been using Perring as a source. Then suddenly… Perring must be exposed!

The problem with this is twofold: First, Perring and Marc Cohodes are no longer friends. What are the odds of ANOTHER coincidence in that Boyd exposes Perring AFTER  Pering has a falling out with Boyd’s main benefactor? (Note that Boyd says he was “investigating” Perring long before Cohodes and Perring broke up.)

Second, Perring was exposed as a liar in January 2018. Much of the material for Roddy’s article on Perring’s stint as a social worker was reported by Gary Weiss and by Bloomberg. But did Roddy credit either of them? No. He mentions a tweet by Weiss, but fails to attribute the information and documents related to Perring’s problems as a social worker to Bloomberg or Weiss. Boyd didn’t “investigate” this issue as much as he read what others wrote about it and used the documents they uncovered.

Read Gary Weiss’s detailed discussion of what nonsense Boyd’s reporting on Perring is here. Oh sure, Boyd has new material about how Perring lied to his girlfriend and was sock puppeting on a message board.  Maybe Boyd’s reporting on this is important. Maybe not. The problem is that Perring was exposed nearly two years ago, and Boyd still used him as a source for his reporting. Now suddenly he has discovered there is a problem?

(Notably, the ex-girlfriend donated $2,000 to SIRF in December 2016, and that donation was returned to her in August 2018, according to Boyd. Curiously, the $329k donation from Perring’s ex-pal Cohodoes was not returned to him.)

Roddy Boyd’s livelihood is dependent on tax-deductible donations from short-sellers who profit from him writing about obscure companies. So it is in his interest to do things that bring in donors, don’t you think?

I would  suggest that Roddy KNEW the donation from Cohodes would create a controversy. That controversy would give SIRF some new visibility and might lead to other large donations. A look at the 2018 donations might suggest this came true.

(I’ll be curious to see what the donations for the second half of 2019 look like.)

But we also have the issue of the Southern Investigative Reporting Foundation as a non-profit with tax-exempt status. To hear Roddy Boyd tell it:

The Southern Investigative Reporting Foundation formed in 2012 with the goal of providing in-depth financial investigative reporting for the common good.

The main beneficiary of Roddy Boyd’s “investigations” is Roddy Boyd himself. He doesn’t want to work as a journalist at a media outlet, so he has invented a job for himself. That’s all fine and well if he’s not doing it with tax-exempt status. Sure, he pays taxes on his salary. But the people who donate to him get a tax deduction for their donations, so they pay lower income taxes because of the fact that they pay Roddy Boyd’s salary. To do what? Fart around “investigating” largely obscure companies?

Roddy says he adheres to the Society of Professional Journalists code of ethics, which says in part: 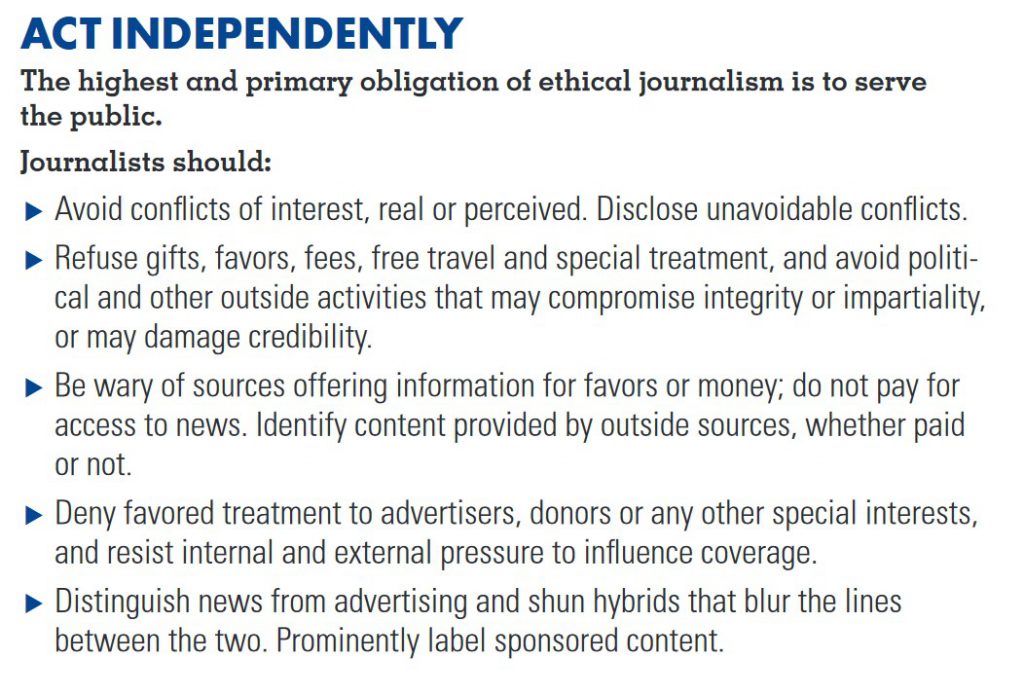 Accepting a large donation of Overstock stock from Marc Cohodes amid a very public controversy about the company (one that we might expect Boyd would want to comment on) certainly creates a conflict of interest. If not a true conflict of interest, certainly a perceived one. And Boyd knew this was the case, which was why he wanted details of the donation kept quiet.

Boyd certainly wasn’t “wary” of sources offering money. Sure, he says Cohodes was never a source and never directed his activities. But Cohodes and Perring were bosom buddies for a while, and Boyd used Perring as a source. Boyd’s non-reporting on Overstock and reporting on WireCard could easily be seen as “favored treatment” of Cohodes. It is not a stretch to say it is questionable at best and stinks to high heaven at worst.

Roddy Boyd has failed on two fronts: as a journalist and as a non-profit. There is some level of responsibility as a journalist to be impartial. It is clear to me that the money from Cohodes has colored Boyd’s objectivity and has directed his actions (or non-actions, as the case may be). As a non-profit with tax-exempt status, there is some level of responsibility to taxpayers. A tax-exempt entity should fulfill a charitable purpose for the good of the public. SIRF doesn’t do that. It benefits a small number of short sellers who happen to have financial interests in obscure public companies.

I sympathize with the position that Roddy was in at the time Cohodes made the donation. He had a failing business and a family to support. A donation of $329k makes that all better, and might spur other donors into action. I can see why he told himself it was okay to take the money. But his actions after that are beyond disappointing. Even if there was no nefarious intent, his lack of disclosure and his blatant lies have made it all much worse.

And yet, we are supposed to trust that he will be an independent journalist uncovering the truth about companies engaged in fraud?

One thought on “Why Roddy Boyd’s Ethics Failure Matters”