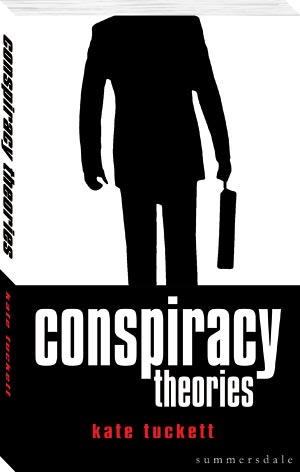 Remember the days when Byrne was claiming that his company’s poor stock price was a direct result of naked short selling of the company stock? And when that allegation couldn’t be proven and consistent poor financial results (even poor after the accounting department did a little magic on them each quarter) seemed to be the real reason the company’s stock hasn’t done well…. then the real story became the massive conspiracy on Wall Street.

It doesn’t seem to matter that these people might have common interests or might connect because they’re involved in related work. It doesn’t matter that some people are quick to accept Facebook connections without much consideration of whether they really want to be connected with other people. It doesn’t matter that “friends” on the internet is something different than friends in real life.

In Overstock.com land, it’s just proof of the conspiracy.

Byrne has shied away from talking about the Sith Lord. Initially the Sith Lord was a particular person Byrne wouldn’t name, but who was at the head of the claimed conspiracy. As actual proof of this imaginary conspiracy has failed to materialize over and over, the story has changed… and now the “Sith Lord” was simply a metaphor Byrne used.

If you’re thinking that all this sounds nutty, it’s because it is nutty. This week paid stalker Judd Bagley, who is apparently employed by the website Deep Capture, which is apparently funded by the trust fund of Patrick Byrne, released a video about this Facebook “proof.” Yes, proof of the conspiracy was outlined by showing that people doing related work had the audacity to “friend” one another on Facebook. And thereby, the conspiracy is proven!

What absolute nonsense. Being “friends” on Facebook proves nothing other than two people may be acquaintances. The depth of that relationship is unknown beyond that. There are no hard and fast rules for deciding who you “friend” on Facebook. So the fact that people are linked there proves absolutely nothing.

And the story gets even better, because bloggers are wondering exactly how Stalker Bagley got hold of these friend lists, as some of the people now in the Deep Capture database have stringent privacy settings and outsiders can’t see their lists. Were these people’s Facebook accounts hacked?

So the Deep Capture freaks are compiling a database of people on Facebook, and who they are “friends” with. The criteria for being in their database is apparently writing about the company’s shenanigans.

Meanwhile, Overstock continues to manipulate its financial statements in the hopes of avoiding bankruptcy for at least the time being.

And Patrick Byrne, instead of running his horrible company that has massive accumulated losses and the inability to generate an accurate financial statement, is busy gloating about what he deems a victory in lawsuit land.

This week it was announced that Overstock.com and Rocker Partners setttled their pending lawsuit, with Rocker Partners agreeing to pay Overstock $5 million. Patrick Byrne used the occasion to gloat about what he believes is a huge victory:

I announced Overstock’s lawsuit against Rocker in an August 12, 2005 conference call I titled, “The Miscreants’ Ball”. In that call (and in subsequent elaboration on DeepCapture.com) I claimed that a network of dirty Wall Street players was engineering modern bear raids, destroying companies and destabilizing the system. I claimed that the network of hedge fund manipulators and compliant reporters intersected in a dirty journalist named Jim Cramer. In the network, I claimed, were hedge funds such as David Rocker’s; putatively independent research firms like Gradient which essentially took dictation from hedge funds; a small group of financial journalists such as Herb Greenberg and Carol Remond who, it appears, also took assignments from this hedge fund network; Milberg Weiss (a plaintiff’s class action law firm which was coordinating its lawsuits with these bear raids); and Eliot Spitzer (whose investigations as New York’s Attorney General mirrored the trading activities of these hedge funds, which were among his largest backers). In addition, I said that the SEC was saying grace over all of this because they had become hopelessly “captured” by Wall Street’s worst elements.

Since then, the SEC’s turn-a-blind-eye deference towards Wall Street has been revealed by the Aguirre and Madoff-Markopoulis affairs (if not much more); Milberg Weiss imploded under DOJ indictments and its leaders were jailed; Jim Cramer was exposed on national TV for the scoundrel he is; Eliot Spitzer was also exposed (but not yet, I believe, for his real connection to this crew); Herb Greenberg and others of the journalists I named have crawled under rocks (or gone to work for the hedge fund network for which I had so implausibly claimed they were shilling); David Rocker’s hedge fund melted down (thanks, according to DowJones, to the SEC finally closing the gaping option market maker loophole against which Overstock had been lobbying for three years – if only, the SEC would not institute a pre-borrow requirement); and Rocker Partners is paying Overstock $5 million (that is on top of Gradient’s earlier retraction and apology, and any monies Gradient paid which I cannot disclose).

So let’s score that one for the good guys.

But how big of a “victory” is this? Well the lawsuit is over and I suppose that’s a good thing. At one point, Overstock was apparently claiming they suffered $1 billion in damages at the hands of Rocker Partners. Byrne has also been quoted saying that the damages may have been in the hundreds of millions of dollars.

The money paid to Overstock.com is nothing but a nuisance payment by Rocker Partners (now Copper River Management). They basically settled for the amount of money a trial in the matter would have cost. And their liability for any further money goes away.

Sure, I suppose Byrne can claim the moral high ground and can call it a victory.  But normal people know that lawsuits are settled all the time and money is often paid even when one party believes they did nothing wrong and really shouldn’t pay anything. Common sense and basic economics often win in litigation, leading to settlements.

Marc Cohodes, the head of Copper River had some wonderful words in their press release about the settlement:

In a detailed statement, Marc Cohodes, the Managing General Partner of Copper River, said, “We have said throughout the course of this litigation that we did not defame Overstock, nor were we responsible for the contents of reports written by Gradient Analytics. Nothing has changed – we settled the case in order to end costly and unnecessary litigation. After originally demanding $750 million and then $30 million in so-called damages, Overstock agreed to settle this case for $5 million – the cost of a trial. Although settlement deprives us of the ability to disprove Overstock’s case and prosecute our counterclaims, we decided that the litigation costs did not justify passing up a practical way to end four-and-half years of meritless litigation by Overstock.”

Cohodes also noted, “I have and will urge the Securities and Exchange Commission and Congress to investigate the damage done to individual investors and the market system as a whole as a result of issuer retaliation – issuers who attack critics rather than attacking the problems on their balance sheets. It is my personal opinion that our country needs more, not fewer, skeptics to turn bright lights on financial shenanigans and company weakness. Only then will we reduce the number of scandals that plague our country every few years.”

“With the resolution of this lawsuit, Overstock is free to devote itself to responding to their current SEC investigation, its search for an auditor to replace Grant Thornton, the threat by the NASD to delist Overstock, the class action in New York alleging false statements about return policies, and issuing financial statements that do not have to be restated yet again. We hope that those issues are addressed thoroughly and justly,” concluded Cohodes.

And please, pay no attention to the fact that Overstock can’t even get its own little gloating press release right, and has to issue corrections. You’d think that such a massive “victory” would be spoken about a little more carefully, no?