Whether or not you are a reader of MckMama (or mommy blogs in general), this post has good information on bankruptcy fraud.  Last week we looked at the bankruptcy filing of Jennifer Howe Sauls McKinney and Israel McKinney, and discussed the many red flags of fraud that have been detected. Jennifer / MckMama has made a very public spectacle of her life, her finances, and her many money-making scams on her blog My Charming Kids, and things may finally be catching up to her.

Today the bankruptcy trustee filed a motion objecting to exempt property, essentially asking the judge to order that certain assets are NOT exempt from the bankruptcy. What does this mean?

Normally, certain assets are exempt in a Chapter 7 bankruptcy filing. The filer is allowed to keep basic items necessary for life, such as a home (up to the amount of your state’s homestead exemption), a car (up to your state’s permitted exemption), household goods and furnishings (up to a value of $11,525, with no single item worth more than $550), retirement accounts, and clothing.

There is a catch, however. You must disclose all of your assets when you file bankruptcy. If you fail to disclose all of the assets, and the trustee finds out about them, the trustee can take possession of them and sell them. The proceeds will go to your creditors.

In March, Jennifer McKinney and Israel McKinney participated in a creditors meeting, during which the trustee was able to ask them questions about their finances and the information disclosed in their bankruptcy papers. According to the Handbook for Chapter 7 Trustees:

The § 341(a) examination of the debtor is an important opportunity to discover potential criminal activity. During this meeting, and while the debtor is under oath, the trustee may acquire or develop facts that may indicate a potential bankruptcy related crime. For example, debtors may lie during questioning on recent repayments of debts, gifts or transfers to insiders. In all cases where the trustee suspects criminal activity after questioning at the § 341(a) meeting, the trustee should immediately notify the United States Trustee so that the § 341(a) meeting tape may be properly secured and stored to preserve its later use in a criminal proceeding.

During the meeting, it became clear that Jennifer and Israel did not disclose all of their assets in their bankruptcy paperwork. In the original bankruptcy filing of Jennifer and Israel McKinney on December 13, 2011, MckMama claimed personal property totaling $44,425, and claimed $39,840 of that property was exempt. Following the § 341 creditors meeting, the McKinneys filed amended information on April 12, 2012. In that amended filing, the personal property totaled $46,300, and claimed that $43,325 was exempt.

The bankruptcy trustee is now asking the court to disallow exemptions for the following assets that were undisclosed in the original filing:

As we discussed last week, the domain names are far more valuable than the $100 MckMama disclosed for them. The value of the web properties also should include the copyrighted content that was published at those URLs. The writings and the pictures on Jennifer McKinney’s websites have substantial value above and beyond just the domain names, and so those valuable assets should become the property of the bankruptcy trustee as well.

In last week’s article, we discussed the undisclosed income of Jennifer McKinney. Despite making substantial money from her blogging activities in the months prior to and including the month of the bankruptcy filing, she claimed she would gross only $1,500 per month from her blog going forward. During the creditors meeting, the trustee uncovered thousands of dollars of advertising income and photography income. In addition, there are likely thousands of dollars of income from affiliate programs, for which the trustee may not have documentation yet.

The amended bankruptcy schedules filed by the McKinneys showed only $55,000 of income from Jennifer’s blogging/photography business for 2011, despite the fact that the bankruptcy trustee uncovered more than $148,000 of income and discussed it with Jennifer and Israel during the creditors meeting.

MckMama also clued us in to other transfers in an August 27, 2011 bog post in which she said she had friends permanently “storing” furniture for her. 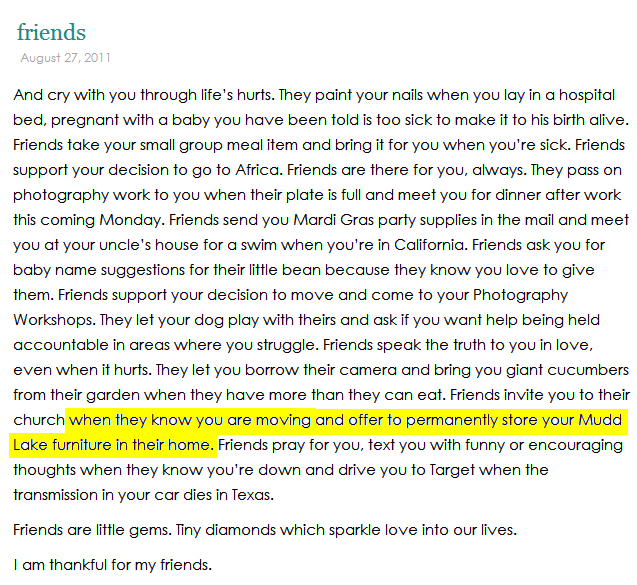 One more issue that may need to be dealt with by the bankruptcy trustee is the payment of creditors before the bankruptcy filing. Such a payment can be considered a preference, meaning that creditor received more than he would have if the payment was not made and the full debt was included in the bankruptcy.

We found out during the creditors meeting that Jennifer’s father, John Sauls, was paid $1,200 toward a debt owed to him by Jennifer in the months leading up to the bankruptcy filing. The trustee could elect to recover this amount from Mr. Sauls and then distribute it to other creditors.

I have no idea what issues the bankruptcy trustee is continuing to pursue. I hope he continues to dig into Jennifer Howe Sauls McKinney’s income, which will likely reveal substantial income above what has been reported. I also hope that he pursues the transfers of assets prior to the bankruptcy, as these may be substantial. I will continue to update this story as new information becomes available.