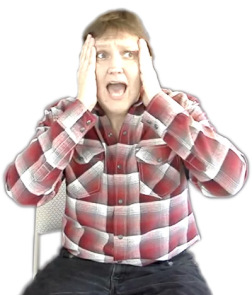 Crystal Cox, extortionist and vexatious litigant, has been slapped down by the United States District Court for the Eastern District of Wisconsin. On May 13, 2013, Cox filed a complaint in federal court against me,  and against a bunch of fine people (WIPO, Peter Michaelson, Marc Randazza, Kashmir Hill, Forbes, Kevin Padrick, David Aman, David Carr, New York Times, Jordan Rushie, Jason Jones, and many others).

Most notably, Crystal claims that THE INTERNETS DEFAMED HER when they referred to her as an extortionist. Because who could possibly get the idea that Crystal Cox was extorting people when she flooded the internet with defamatory material about them, and then offered to remove the material (reputation management services, people!) for a nominal fee of $2,500 per month into infinity????

U.S. Magistrate Judge Aaron E. Goodstein has dismissed Crystal Cox v. Tracy Coenen et al, after apparently doing a good bit of homework on the shenanigans of the plaintiff. In the order dismissing the case, Goodstein recounts the history of Cox being hit with a $2.5 million judgment for defaming Kevin Padrick and Obsidian Finance, and her generous offer of “reputation management services” to Padrick and Obsidian.

The order discusses various media pieces on Cox, and the prevailing opinion that her reputation management nonsense was a thinly veiled attempt at extorting Padrick and Obsidian:

Cox contends that this email was taken out of context and any suggestion that her conduct was extortionate was defamatory. She emphasizes that she was never criminally charged with extortion. Therefore, she seeks to sue a wide range of persons or entities that reported on her case against Obsidian and Padrick and suggested that her conduct in that matter constituted extortion.

The judge moves on to the controversy with Marc Randazza, in which Cox did her extortion routine again:

The WIPO and the United States District Court ruled for Randazza and in doing so repeatedly characterized Cox’s conduct as extortion. In granting a preliminary injunction in favor of Randazza, the court stated:

Defendants’ actions leading up to the filing of the Complaint, as well as Defendants’ past behavior, as represented in Plaintiffs’ reply briefing, clearly seems to indicate cyber-extortion. Specifically, Defendant Cox’s request for $5 million in exchange for <marcrandazza.me> and her offering of “reputation management services” indicate her intent to profit from the registration of Plaintiffs’ personal names as Domain Names. Defendant’s post hoc attempt to explain this as a “joke” is not credible. Given the fact that the Defendant has been shown to have engaged in a pattern of cybersquatting and cyber-extortion, this Court finds that she was more likely than not, attempting to sell this domain name to the plaintiff, or to solicit a price for the domain name in excess of her out of pocket expenses related to the domain name.

He also quotes another court decision in favor of Randazza:

In this case, Defendants have embarked on a campaign of cyber-extortion. Specifically, Cox sent an e-mail to Plaintiff Randazza that informed him that she had purchased <marcrandazza.com> and, in that same email, informed him of her “need to make money.” Additionally, Cox currently uses several of the Domain Names to operate websites where she publishes “articles” with the apparent intent to tarnish Plaintiff Radazza’s online reputation. Moreover, Cox has actually offered to sell at least one of the Domain Names, <marcrandazza.me>, for $5 million. Similar to the price that the defendant in Bogoni advertised, this price is drastically beyond the actual value of <marcrandazza.me> to anyone other than Plaintiff Randazza. Thus, for these reasons, the Court finds that Plaintiffs will likely succeed in establishing that Defendants had the requisite specific intent to profit.

And in another decision in the Randazza v. Cox case:

And of course there is the World Intellectual Property Organization (WIPO) decision against Cox and in favor of Randazza:

Likewise, in one decision, the WIPO concluded that Cox’s domain registrations were illegitimate because they were “actually components of an artifice intended to extort funds from the Complainant and thus a pretext for a rather egregious variant of cybersquatting.” (Docket No. 1 at 50.) The WIPO decision continued, “her objective in both registering and using the disputed names was apparently to engage in a rather sinister and tenacious scheme to extort money from the Complainant.” (Docket No. 1 at 50.)

Crystal Cox repeatedly ignores the plain meaning of the word extortion, and claims that there is a conspiracy to defame her, since she was never charged with or convicted of “the crime of extortion.”

The judge dismissed Cox’s case against all defendants, most notably saying:

Tracy Coenen occasionally blogged about Cox, referring to Cox’s conduct with respect to Obsidian and Randazza, as did the federal court, the WIPO, and many others, as extortion.

Indeed, it would appear that I am immune.

He also makes it clear that Cox cannot and should not file the same lawsuit in multiple jurisdictions, as that is not allowed in federal court.

It is probably also a good time to note that Cox fell flat on her face in the United States District Court for the District of Arizona. Cox again sued the internets, for the same perceived infractions. The judge threw out that case, saying it does not clearly state what acts of what defendants give rise to Cox’s claims (and essentially says that her complaint is incomprehensible):

Because the complaint does not properly state a claim for relief over which the federal Arizona District Court has jurisdiction, regardless of whether Plaintiff has met the standard for proceeding in forma pauperis, the Court is within its discretion in denying her in forma pauperis status and dismissing the complaint without prejudice.

Will repeated losses deter Crystal Cox? Likely not. The crazy train will keep on moving.