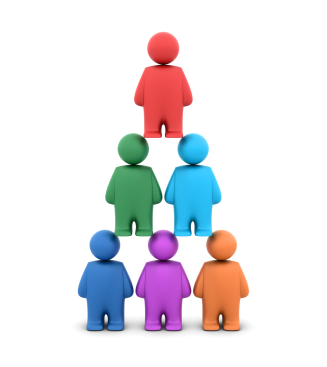 Multi-level marketing companies (MLMs) are nothing but pyramid schemes. Oh sure, there are websites that go to great pains to discuss the difference between MLMs and pyramid schemes. But when you boil it down, MLMs are indeed pyramid schemes, and ta class action lawsuit filed against Arbonne International last year explains this well.

A classic pyramid scheme operates as follows: recruits pay into the scheme for the right to receive compensation from the scheme based, in large part, on bringing new recruits into the scheme. Each recruit’s money is used to pay other recruits in the scheme (particularly more senior recruits), as well as the scheme promoter. The more recruits one brings in, and the closer to the top of the pyramid he is, the more money he might make. Recruits will necessarily lose their money unless they recruit enough new people into the scheme, who will also lose their money unless they recruit enough new people, and so on. Because there is little or no outside money flowing into the scheme from real operations (other than recruitment), because payments from recruits are shared disproportionately with the persons closer to the top of the pyramid, and because the scheme operator takes a healthy cut for himself, the vast majority of recruits are doomed to lose most or all of their investments.

Multi-level marketing companies say that it is obvious that they are NOT pyramid schemes. They say they aren’t “pay to play.” They have a product and it’s being sold to customers, so it can’t be a pyramid scheme.

But the lawsuit goes on to explain how MLMs really are pyramid schemes with the following points:

It really is just that simple. MLMs deny being pay to play schemes, but they’re lying. Every MLM has requirements for minimum purchases that must be made to stay active in the company and to “qualify” for commissions and other payments. What is that requirement if not pay to play?

As the lawsuit sets forth, the MLM companies use pay plans that encourage people to buy products they likely won’t ever be able to sell (because the retail sales to people outside of the MLM are so low):

So, to incentivize Consultants to purchase lots of product, Arbonne offers a variety of bonuses through its overly complicated SuccessPlan. As described herein, each of these bonuses is designed to encourage Consultants (a) to purchase product they do not need and cannot sell, just so they can maintain or increase their status in the Arbonne organization, and (b) to recruit new Consultants who will do the same.

But each of these bonuses results in Consultants being paid with other Consultants’
money. Relatively little money comes in to Arbonne from Retail Clients or Preferred Clients. Most of Arbonne’s sales are to the Consultants, and so the money Arbonne uses to pay bonuses to Consultants comes from other Consultants. In this way, Arbonne bears the most critical aspect of a pyramid scheme: the payment of money to participants using other participants’ money. Whether they know it or not, the Consultants are feeding off each other, their payments from Arbonne completely dependent upon an influx of new money from Consultants.

So how is an MLM like Arbonne a pyramid scheme?

The lawsuit also talks about the proof that Arbonne doesn’t care if there are any retail sales:

Arbonne is no different from other multi-level marketing companies. They all use their products as bait to bring in new recruits. It makes the “business opportunity” look legitimate and allows them to appear as if they are not a pyramid scheme. But when you drill down into the details and you consider how little product is actually sold to bona fide customers, it becomes clear that these MLMs are indeed pyramid schemes.

3 thoughts on “Why MLMs are Pyramid Schemes”