Roddy fancies himself an investigative reporter. He has done some good work in the past (10 years ago), but nothing particularly notable. He hasn’t won any journalism awards of any great importance, which isn’t the end of the world, but it’s also a signal about his work. The closest he came to an award was Huffington Post calling him a “dangerous” person in financial media in 2012. (Funny enough, the article mentions Overstock.com, precisely the company that got Roddy into the ethical dilemma I have been writing about.)

It’s no secret that I have a problem with SIRF being a non-profit. Donations to SIRF are tax deductible, and yet the organization isn’t charitable in any way. It’s simply a way for Roddy to make a living since he chooses not pursue a traditional journalist job. I don’t have any problem with someone creating a job for themselves, but I do have a problem with people getting tax deductions when they give him money.  Deductions for charitable contributions should be reserved for money given to actual charities.

In fairness, Roddy does masquerade as someone doing things for the public good. His SIRF website has a tagline of “In-depth financial investigative reporting for the common good.” I wrote last month:

A recent comment on one of my articles on this site: 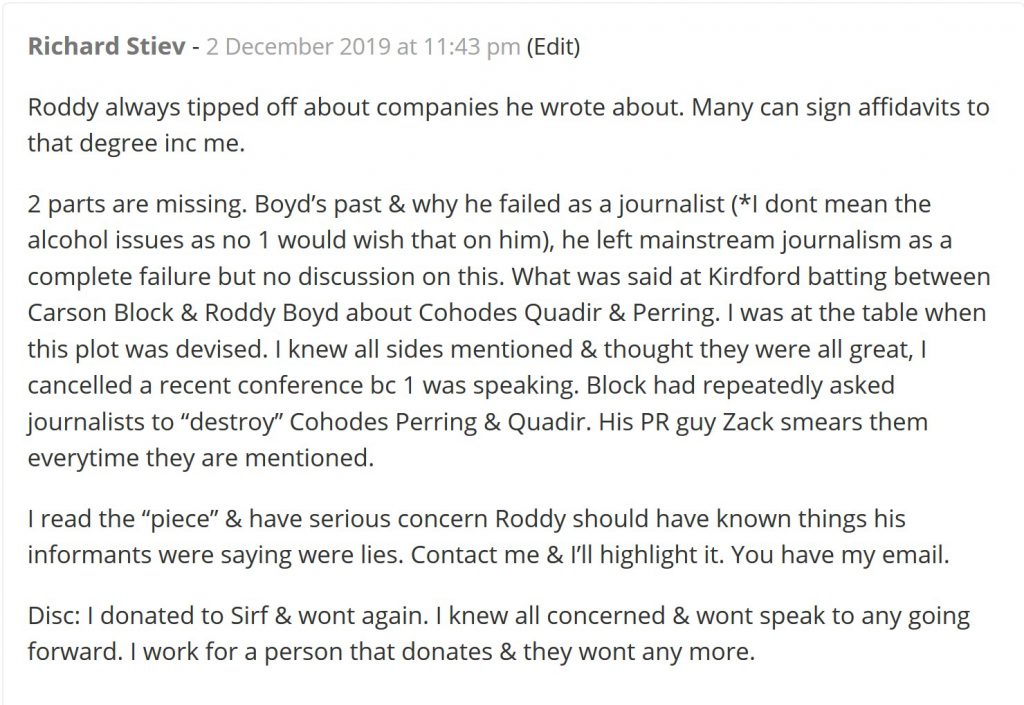 Naturally, I don’t have any way to verify the information here, but this isn’t the first time I’ve heard rumors to this effect. I have heard from a couple of parties that Carson Block (of Muddy Waters Research) had an interest in targeting Fraser Perring, but wanted others to do the dirty work for him.

Let’s go back to the charade of corporate accountability at SIRF.  I would argue that the first step to  accountability journalism is independence. I think that for a long time, Roddy appeared to do a good job at this. But then he had financial troubles and needed to pay his mortgage. In steps Marc Cohodes with $328,750, and how could Roddy say no?

But once he took that donation and thereby agreed to not write about Overstock.com, his independence was compromised. He made it worse by buddying up with Cohodes and sidekick Frasier Perring for some “reporting.” And then denouncing Perring after Cohodes and Perring had a falling out. The timing of these things looks bad and doesn’t look coincidental, no matter what Boyd now claims.

What’s more, Roddy writes the stuff and calls himself the “editor.” It’s a one-man shop that puts out a story every two or three months. And for that Roddy is paid $180,000 per year plus $15,600 in benefits.

Why don’t we take a look at salaries for employees of organizations that really do accountability journalism so we can see if Roddy earns his keep. (Thanks to Gary Weiss for pointing me in the direction of these organizations and their salaries.)

These comps tell me that Roddy is overpaid. Sure, Roddy can pay himself whatever he wants. But $180,000+ for a guy who throws out an article here and there about largely obscure companies that almost no one cares about is certainly not the going rate for real journalists, working for real independent journalism organizations, turning out a respectable amount of reporting. (It gets even worse of you believe that Roddy’s reporting is influenced by his donors and you suspect that he tips off investors in advance of publishing.)

It’s the season of giving. Please give to real charities, not the “investigative reporting” hobby that Roddy parades about as an important tool to keep the public informed.