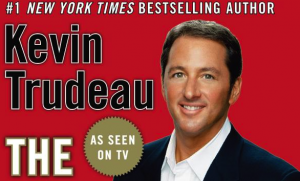 He did time in the early1990s for credit card fraud. The FTC went after Trudeau in 1998 for false and misleading information in the infomercials, and he had to pay a $500,000 fine. Then in 2003 they went after him for violating the order in the 1998 case when he made claims that Coral Calcium Supreme cured cancer. In 2004, he had to pay a $2 million fine related to this violation.

In 2007, Trudeau got tagged again for making false and misleading claims to consumers.  In 2008, he finally got himself banned from doing infomercials. He was supposed to pay a $5 million judgment as well. In 2011, Trudeau got a $37 million judgment for more shenanigans, but he claimed he had no money to pay the judgment.

Kevin Trudeau was finally sent to prison in 2014 with a 10-year sentence. He is anticipating his scheduled release in May 2022, and it seems nothing has changed.  Trudeau wrote an email to his sentencing judge asking what he is allowed to do to earn money when he’s released.

But of course, he had to congratulate himself and prove that some people never learn:

I understand that the FTC sent checks out to people who bought my book, and many people returned the checks because they did not want a refund as they in fact liked the book they purchased.

Everyone who wanted a refund, received a refund as far as I know (and even those who got a refund were still allowed to keep the book they bought as well as the other 3 hard cover books they received with their order as free bonuses).

In his email, Trudeau asked how much he is supposed to pay the court (as if he doesn’t know). His assets were auctioned off to help satisfy the judgment, but he still owes money.

When I am released from prison, am I allowed to earn money or must I still turn over 100% of all the money I would earn to ‘someone,’ and if so who?

Kevin, the answer is YES. Yes, you’re allowed to earn money. And yes you’re supposed to pay the money you owe. He also asked if he is allowed to receive donations and gifts. It appears the wheels in his head are turning, like any good white collar criminal. Too bad the time in prison hasn’t taught him that he just needs to earn a living and pay back the victims who were swindled out of tens of millions of dollars.