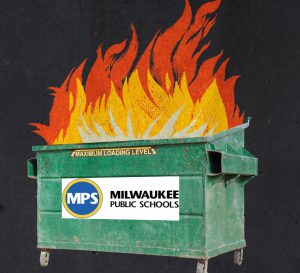 In 2008, I started writing here about Milwaukee Public Schools (MPS) because the district was presenting the numbers in a dishonest way, complaining that they were underfunded.

I was appalled that a school district could waste $1 billion a year and repeatedly say that they just don’t have enough money. Despite massive spending, the district has some of the worst educational outcomes in the country:

For the 2018-19 school year (they didn’t produce any data for last year), MPS had 18.4% of its students proficient in English language arts (i.e. reading and writing) and 14.8% proficient in math.

Let that sink in for a moment. More than 80% of MPS students cannot read and write at grade-level.

Here’s more analysis of the data and MPS’s failure if you’re interested.

They always cry that it’s about the money and they’re a “poor” district. But the truth is that Milwaukee Public Schools is one of the top spenders in the state on a per-child basis.

We also hear the “urban school district” excuse, and that it’s so much harder to educate at-risk urban kids. Except other urban districts around the country are able to educate children.

The latest MPS failure surrounds returning children to the classroom. The children have been “learning at home” for more than a year now, thanks to COVID-19. Never mind the large number of households in the MPS district that don’t even have internet access.  Or the fact that many kids aren’t even attending virtual school.

You would think that in a district with such poor educational outcomes, overwhelmingly challenging home lives, lack of proper nutrition, lack of access to internet and other resources for virtual schooling…. the teachers would have been begging to get students back in the classroom.

They always say it’s about the children.

But it’s never been about the children.

Despite the fact that most private schools have been operating in-person this entire school year… And most public schools in Wisconsin have phased in classroom learning over the school year….

MPS is still virtual and teasing a return to the classroom on April 14. The Milwaukee Teachers Education Association (the union) is fighting tooth and nail to stop it. They’re just not ready. The plan isn’t good enough. They don’t know about vaccinations.

To be clear: No plan will ever be good enough for MTEA. There will never be enough preparation or vaccination. MTEA’s purpose is to stop in-person teaching. There is no science or data to back up their stance that classroom learning should not happen. But they don’t care. (They’re not the only ones. The Madison teachers union is opposed to returning to the classroom too.)

It has never been about the kids. The teachers unions blocking the return to in-person learning for children should be ashamed of themselves.