In July, critics attacked Groupon (GRPN) and it use of a made-up accounting measure management called Adjusted CSOI. I suggested that the company made up the measure to exclude many of the company’s expenses to make the company look more successful.

There was more to the story, however, as the Grumpy Old Accountants revealed Generally Accepted Accounting Principles (GAAP) violations in reporting revenue. Essentially, Groupon was recording more than twice the amount of revenue it should have been reporting under GAAP. The Grumpies explained:

This means that if the Company sells a coupon for $40 promising $80 in services, it records the entire $40 as revenue, despite its having to remit 50% or more of the coupon proceeds to the merchant that actually provides the goods or services. Has Groupon really earned $40 (gross revenue recognition) or $20 (net recording, Groupon’s actual marketing commission).

On Friday, Groupon restated its financial statements to correct the accounting revenue error, and the new financial statements were enlightening. The company’s bottom line for 2008 through 2010 remained unchanged, but top line revenue was reduced to under half the original numbers. This was expected.

But Groupon apparently didn’t want to let go of that much larger gross number, so management found a way to included it in the “Operating Metrics” section of the filing. The company cites “gross billings” and defines that as the amount collected from customers for Groupons sold, net of estimated refunds.

Curiously, the numbers reported for “gross billings” are larger that the original revenue number reported, with no explanation for the discrepancy. As customers purchasing Groupons are required to pay for them immediately, it appears that the original (faulty) revenue figures and the amounts collected from customers (called gross billings) should be nearly identical. They are not:

Most notable however, is the dramatically different picture that is painted when we analyze the marketing expenses in light of the restated financials. 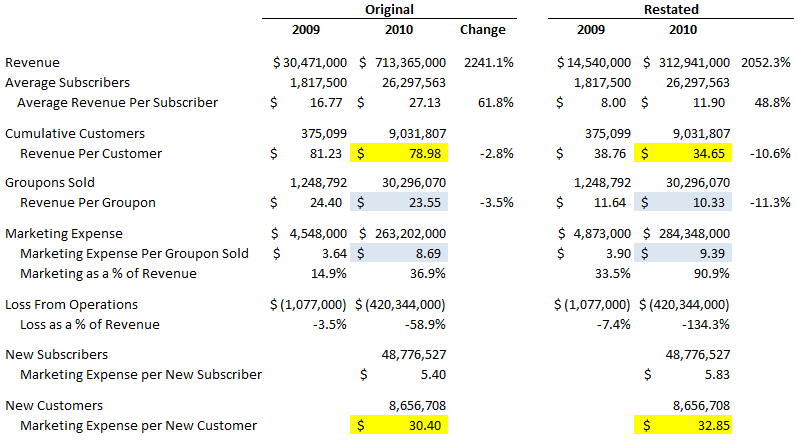 It is clear why Groupon improperly reported revenue prior to being called out by Professor Anthony Catanatch and Professor Edward Ketz. By reporting revenue properly (much smaller revenue numbers!), Groupon’s precarious financial position and operating strategy are exposed. Simply put: The business of Groupon does not work. And I suspect that merchants and consumers are losing interest in the Groupon type of gimmick, which puts even more financial strain on the company.

How will Groupon ever become profitable? It is unclear to me. But what is clear is that the company’s numbers are absolutely awful once the company reports revenue according to GAAP.  An analysis of the correct numbers and associated percentages shows a business that is incredibly expensive to run.

Who cares about the massive top-line growth if there is no chance for profitability? It has been terribly expensive to acquire new customers, and there are fewer potential new customers out there. I predict Groupon will spend more and more on marketing, and get less and less in return. And as the numbers show, there is absolutely no room to spend more but get less back.

Anyone want to get in on the Groupon IPO? I sure don’t!

And what about the auditors? Ernst & Young signed off on the 2009 and 2010 financials, with no apparent qualms about the improper revenue recognition. This is noted in a section of the SEC filing called “Experts.”  I have written time and again that auditors do not find fraud, and this is a prime example of auditors not finding something that was right in front of their noses. Do not put any faith in the audit report of Ernst & Young.