It’s crunch time for Groupon (GRPN). The roadshow for the company’s Initial Public Offering went live last week, and Groupon’s offering will happen this week. Demand for the shares is apparently through the roof. The company was hoping to sell 30 million shares at $16 to $18 each, but word is that Groupon is now looking at increasing the offering price.

You can see the slide deck for the roadshow here. The presentation highlights the company’s massive growth, marketplace penetration, and ability to earn revenue.

Yes, growth of 426% year over year is impressive. But it is obviously not sustainable in the short or long term. The daily deals market is nearing saturation, and there are lots of competitors with a relatively low cost of entry. How much more can Groupon grow? Just look at the current growth dilemma:

The latest quarter saw some troubling signs. Revenue growth moderated, rising 9% from the prior quarter, compared with 32% in the second quarter. The number of Groupons sold rose just 1%, to 33 million, from the prior quarter, versus a 16% gain in the second quarter. This could mean that Groupon’s reduced marketing spending, which helped its bottom line in advance of the IPO, may be hurting growth.

And what about the bottom line? Previously, Groupon wanted us to ignore the bottom line in favor of a made-up  measure called CSOI. Management said this measure is more meaningful than traditional financial measures, since Groupon is such a unique company. The SEC didn’t buy it.

The numbers for 2011 look better, although Groupon is far from being profitable. The third quarter of 2011 showed the most improvement.

This is precisely where investors need to be extra careful. Groupon is completing its IPO prior to year-end, and therefore prior to an audit of the financial statements. The race is on to finish the offering before the auditors take a good look.

Now I’m no fan of audits of financial statements. They don’t provide a lot of comfort to investors. They certainly don’t find fraud. And in this case, the auditors Ernst & Young failed to find revenue accounting errors the first time around. And the historical financial statements have been restated twice (here and here) since Groupon filed its initial S-1 in June 2011.

Even with all the problems inherent in audits, they are at least one small measure toward keeping executives honest. The latest numbers (9 months ended September 2011) issued by Groupon haven’t been audited. They have only been reviewed, and that type of work by the auditors is extremely limited in nature.

Should investors worry? I think so. The September 30, 2011 numbers are almost too good to be true, especially when you look at them next to prior periods. The company is still thoroughly in the red, but magically, the marketing expenses were dramatically lower than we’ve seen in the past. Morningstar said that Groupon intentionally cut back on marketing in the third quarter to improve its bottom line ahead of the IPO. As a percentage of revenue, marketing in the third quarter of 2011 was 54.8%, compared to 92.9% for all of 2010. Sounds great, right? 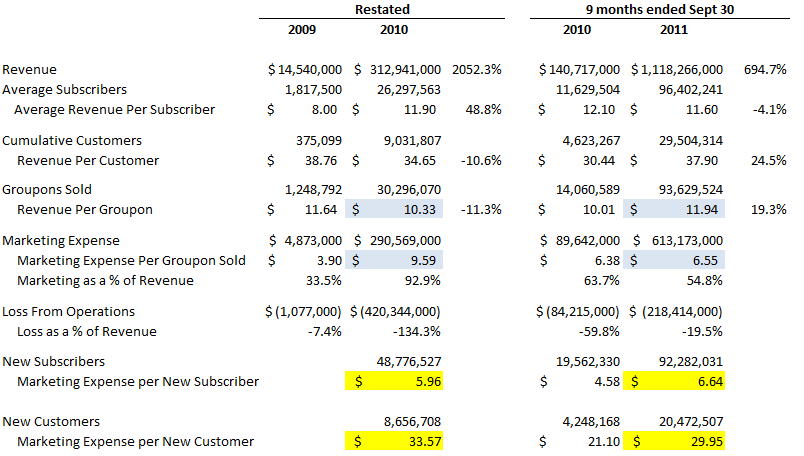 Others are concerned that Groupon’s third quarter numbers were dressed up for purposes of the IPO. The concerns are legitimate. And even with the (probable?) fancying up of the numbers, they’re still not that amazing.

Everyone understands that the purpose of the roadshow is to make Groupon look as good as possible. Management is trying to figure out how much interest there is, and how much they’ll be able to sell the shares for. They want to maximize the proceeds of the offering.

I wanted to calculate this figure myself, so I started looking at the figures related to gross billings and customers for the quarter ended September 30, 2011. I calculated the following: 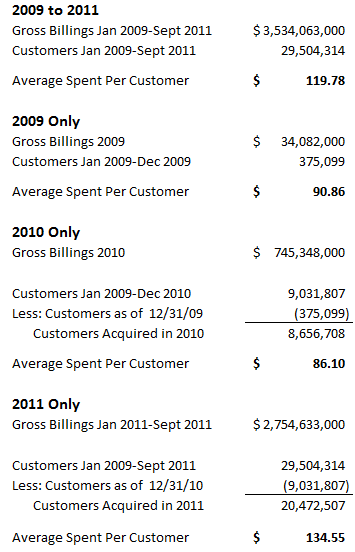 Except that’s wrong. Very wrong. How do I know? I looked at 2010 and did the same calculation using September 2010 numbers, and compared it to the full year 2010. For September 2010, I calculated: 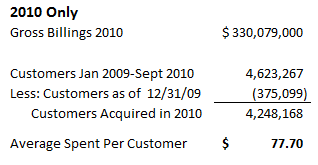 Divide $77.70 by 9 months, multiply by 12, and you get an “annualized” figure of $103.60. Except if you look further above, you see the real annual figure for 2010 is only $86.10. Therefore, trying to annualize figures based on the 9 months through September provides a faulty result.

Be very, very careful in relying on Groupons figures related to the subscribers, customers, revenues, and gross billings. These numbers can easily be confusing and misleading.  It seems like Groupon is trying to capitalize on the confusion.

Beyond the Financial Statements

The concerns about Groupon go beyond the financial statements.  There are several problems with Groupon’s business model:

Thankfully, not everyone is falling all over themselves to buy this stock. Morningstar analyst Rick Summer said in this interview that there is no long-term sustainable competitive advantages with Groupon.  He says there is limited potential for profit, with an estimated 8%  to 9% for operating margins on the upside. Groupon has an unproven business model that doesn’t scale well.

Summer says that Morningstar thinks  the shares are worth $8 each, but that they will probably go for $16 to $18 per share. He says Groupon is too high risk (“venture capital type risk”) for public investors to consider buying at anything more than $4 or $5 a share.

Why the lack of excitement? Groupon’s greatest resource at this point is its massive email distribution list, which attracts merchants. However, as time goes on, the value of this advantage diminishes. Other companies can quickly grow their own distribution lists. And Summer says a good measure of this advantage is the number of repeat (“legacy”) customers, which over the last couple of quarters has dropped by about 50% for Groupon.

Even though audited financial statements are not guaranteed to be fraud-free, an audit still gives some comfort about the numbers. Groupon is going full steam ahead with its IPO based on unaudited numbers, and investors should beware. There is a reasonable chance that these numbers have been manipulated to boost the company’s value for the IPO.