We hear over and over that there are “big budget cuts” and that government budgets have been “cut to the bone” and that there is “nothing left to cut.” What is the truth behind government budgets? The cuts are a myth. And the idea that austerity hasn’t worked is pure fiction, because we haven’t had any austerity in the United States. Governments have continued to spend like drunken sailors, and cries of “nothing left to cut” are merely  fraud on taxpayers.

The Milwaukee Public School system gives us an excellent example of this. For years we’ve heard about budget cuts and how individual schools are suffering. We hear about how teachers don’t have basic classroom supplies, and how “budget cuts” are leading to classrooms with 40 children.

If there isn’t money for classroom supplies or other necessities, then the problem is with how the money is spent. In the case of MPS, the problem is employee costs.

It’s easy to debunk the “budget cuts” myth that governments are constantly harping about, simply by using facts. By looking at the actual numbers, instead of listening to lies from the left. A Wall Street Journal article points out that the federal government spent more the last fiscal year than ever. Fiscal 2011 ended on September 30, and total spending was $3.6 trillion. The next most spendy year was 2009, in which the federal government spent $3.52 trillion.

This chart put together by WSJ is enlightening. Look at the massive deficits we’ve been racking up over the last 3 years. And again, you should be reminded that we’re not spending our way out of a recession. If government was the answer to an economy’s problem, why aren’t things better? 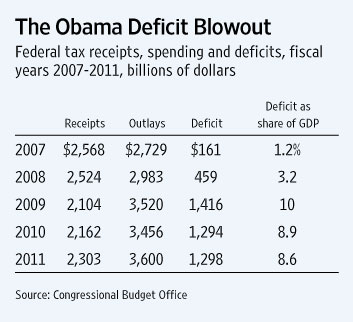 From January through September of 2011, federal spending was $120 billion higher (or 5% higher) than the same period in 2010. The suggestion that austerity has hurt our economy and its growth is preposterous. There is no austerity.

But the left would tell you to pay no attention to the man behind the curtain. They’re claiming that budgets are down and the economy is suffering because of it:

A July article in USA Today, for example, claimed that “Already in 2011, softer government spending has sapped growth.”

Jared Bernstein, former chief economic adviser to Vice President Biden, wrote over the summer that “government spending cutbacks have been a large drag on growth in recent quarters and have led to sharp losses in state and local employment.”

Economist and New York Times columnist Paul Krugman argued in September that “the turn toward austerity (is) a major factor in our growth slowdown.”

Maybe all the budget cutting went on at the state level? Nope. States spent almost 10% more in 2010 than they did in 2008, according to the National Association of State Budget Officers’ annual State Expenditure Report. Spending by states in 2011 is expected to be 5.2% higher than 2010, and in 2012 it is expected to rise another 2.6%. Now that we’ve had our reality check, can we stop all this mindless spending? There are plenty of places to cut budgets and we need to start doing it. Tell government to get out of our lives. If something is a good idea, let the private sector do it. Our government should strive to have a minimal amount of interference in our lives, with people being encouraged (nay, required) to support themselves (and their families). We need more personal responsibility and fewer [failed] government programs.