On Friday, the market eagerly awaited the release of Groupon’s (GRPN)10-K, detailing results for the year ended December 31, 2011. Shares were up 3.84% during regular trading hours, but dropped as much as 8% (eventually settling at -5.93%) in after hours trading when the company announced its figures were not as good as reported in February.

Some news sites are billing this as a restatement, although it would appear to be more of a revision to the numbers, as the original numbers were simply cited in an earnings release and the financial statements weren’t actually issued until Friday.

Here was the original announcement regarding the fourth quarter of 2011:

And here is the revised announcement for the fourth quarter of 2011:

You can see that the most important figures are revenue (which got reduced by $14.3 million) and operating income (which was reduced by $30 million, and went from a profit to a loss for the quarter).

History of Accounting Problems at Groupon

This isn’t the first problem Groupon has had with its accounting, and it certainly won’t be the last. Groupon’s first set of restated numbers came prior to the IPO, when the SEC told it to fix GAAP violations in the reporting of revenue. Of course, this only happened after the Grumpy Old Accountants pointed out that Groupon was substantially overstating its revenue.

This was also after Groupon was criticized for using the non-GAAP (made up) financial measure of Consolidated Segment Operating Income (CSOI), which asked investors to ignore its massive marketing costs, even though those are closely related (and critical) to its generation of revenue.

Last year I warned investors about relying on Groupon’s unaudited financial statements. And lo and behold, the first audit after the IPO comes out, and things aren’t looking too rosy for Groupon. In its race to show profits, the company improperly calculated its reserve for customer refunds, meaning the company actually had a loss for the quarter ended December 31, 2011, rather than the profit originally reported to the market.

A big part of the story here is the failure of Groupon’s internal accounting controls. As a result of the audit work performed by Ernst & Young, management had to report that the company’s internal controls over financial reporting are not effective:

Based on this evaluation, management concluded as of December 31, 2011 that our disclosure controls and procedures were not effective at the reasonable assurance level due to a material weakness in our internal control over financial reporting, which is described below.

With the oversight of senior management and our audit committee, we have begun taking steps and plan to take additional measures to remediate the underlying causes of the material weakness, primarily through the development and implementation of formal policies, improved processes and documented procedures, as well as the hiring of additional finance personnel.

Did I mention that the Grumpy Old Accountants told everyone prior to the IPO to not trust Groupon’s accountants? Specifically, they said:

Finally, there is the issue of adequate internal controls.  It is absolutely ludicrous to think that Groupon is anywhere close to having an effective set of internal controls over financial reporting having done 17 acquisitions in a little over a year.  When a company expands to 45 countries, grows merchants from 212 to 78,466, and expands its employee base from 37 to 9,625 in only two years, there is little doubt that internal controls are not working somewhere.  Any M&A expert will agree.  And don’t forget that Groupon admitted to having an inexperienced accounting and reporting staff.

But the Groupon story gets even better. In June of last year, the Grumpy Old Accountants shined a light on the problems with  Groupon’s cash flow. They said it looked like Groupon was overstating its cash from operations, but that there wasn’t enough information provided by the company to know for sure.

At the time of the earnings announcement, the Grumpies told CFO.com more about their suspicions:

[Professor Anthony] Catanach says it is also possible that Groupon is obscuring the quality of its cash flow by providing an aggregate cash-flow statement that lacks many of the details required in 10-Q and 10-K reports filed with the Securities and Exchange Commission. “One of the measures that it keeps touting is its improved free-cash flows and operating cash flows,” says Catanach. But it remains unclear, based on the statement, “where that cash is coming from,” he says. As a result of this omission, the company could be increasing its operating cash flows by stretching out payment terms with its vendors and thus spiking current liabilities, says Catanach. This is a concern because the nature of these liabilities could be crucial information for investors. If Groupon were increasing operating cash flows by slowing payments to merchants, for instance, it could be setting itself up for a fall.

And Groupon’s CFO, Jason Child, called that accusation “silly,” and the article explained:

When it comes to its cash flow, Groupon has a business model that allows it to generate significant cash by paying its vendors about 60 days after it collects from customers. “We do not have inventory, so those payable days provides an operating cycle that produces cash rather than utilizes it,” says Child.

But the company did not increase its cash flow by stretching out payment terms, Child says. Rather, the increase in cash this year came largely from sales growth, he says. “[Catanach] was saying we could be growing our number by not paying our bills. That notion is actually silly,” Child says, because Groupon’s accounts-payable days last quarter were 68, down from 83 in the same quarter the year before. The number is comparable to accounts-payable days at another online commerce company, Amazon.com.

The Grumpies don’t think this issue is so silly:

And then there is Groupon’s Magic Cash Machine!  Groupon’s CFO took exception to our criticism about providing only aggregate cash flow data that failed to explain the 234 percent improvement in 2011 OCF.  But even he recognizes that “it is pretty unusual to have a business that loses money from a GAAP income perspective, but actually generates free-cash flow.” Sorry Mr. CFO, “pretty unusual” does not hack it…this situation refutes all logic!

But the problems don’t end with the accounting function. Earlier this year I criticized Groupon’s problems with customer loyalty and marketing costs. And I am wondering if there is an even bigger problem in this area, based on changing disclosures.

Leading up to the IPO, Groupon disclosed the following important operating metrics: gross billings, subscribers, cumulative customers, featured merchants, Groupons sold, average revenue per subscriber, average cumulative Groupons sold per customer, average revenue per Groupon sold, and cumulative repeat customers. Figures for these important metrics were provided going back to 2008. I did a few additional calculations with those numbers, and voiced some concerns about the business model and the company’s financial results.

My previous analysis showed troubling figures on a “per Groupon” basis, and magically we have no figures on the number of Groupons sold with which to continue this analysis. I also criticized the numbers on a per new subscriber and per new customer basis, and neither of these figures can be calculated anymore either. Below are the numbers calculated previously, along with the calculations that can be done based on the new disclosures: 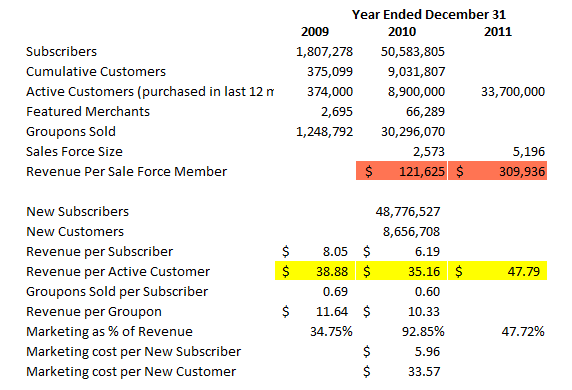 And let me point out again a criticism I launched when Groupon was doing its road show. In its slide deck, Groupon touted: “Our Average Customer Spent Over $170 Per Year as of Q3 2011.” The number $170 appeared to be completely fabricated, likely calculated using an incorrect methodology.

The numbers released for December 31, 2011 clearly show that $170 per year spent per customer was a lie. The company released the number of active customers, defined as a customer making a purchase in the last 12 months. In this case, there were 33.7 million customers who made purchases in 2011.

Divide the annual revenue of $1,610,430,000 by the 33.7 million buying customers and you get revenue of less than $48 per active customer. (And lest you should think that Groupon used some other definition of customer in calculating the $170, note that other variations of the calculation would use a larger customer base, thereby decreasing the revenue per customer even more.)

Are we really to believe that revenue per sales force member increased almost 155% from 2010 to 2011? I simply don’t believe it. While I do believe that greater efficiencies are possible and sales methods may be more successful as the business matures, I do not believe this sort of improvement from one year to the next is possible. There is something more to this part of the story.

Please continue to view all of Groupon’s numbers with the greatest skepticism.